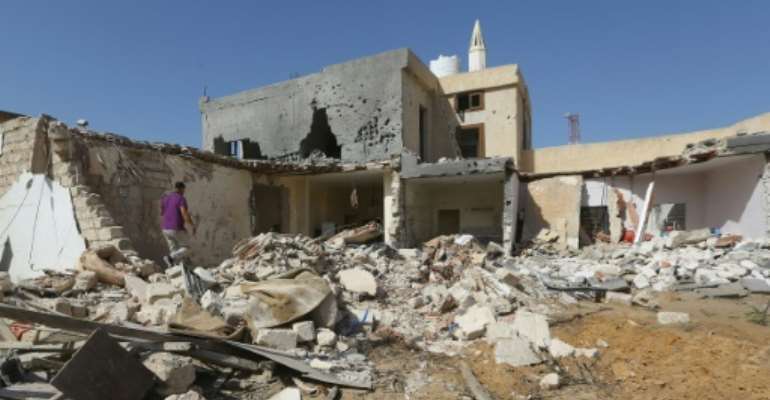 An area in the southern part of Tripoli is seen in October 2019 after a deadly air raid. By Mahmud TURKIA (AFP/File)

Multiple armed groups from Sudan and Chad were involved in the conflict in Libya this year, according to a UN report published Tuesday, which did not mention the presence of Russian fighters recently noted by the media.

Russia has denied reports that several hundred mercenaries are supporting military strongman Khalifa Haftar who launched an April offensive to seize the capital of Tripoli from armed groups backing the internationally recognized Government of National Accord (GNA).

The report named five Sudanese and four Chadian armed groups that it said had contributed several thousand combatants to both sides of the conflict.

But a diplomat, who spoke on condition of anonymity, said it is "an open secret that large numbers of Russian mercenaries are fighting in Libya."

The reason they were not mentioned in the document is because their activities have "largely taken place since the cut-off date for compiling the report," he said.

"However, we are aware the panel are in the process of gathering evidence of the extent of Russian activity and will update the committee in the coming months," the diplomat said.

A summary of the report seen by AFP revealed that Jordan and the United Arab Emirates have regularly supported Haftar's forces and that Turkey has supported the GNA, in violation of a UN arms embargo imposed on Libya since 2011.

Turkish President Recep Tayyip Erdogan confirmed Tuesday that his country was ready to send troops to Libya in support of the GNA.

The UN report notes that materials made by the United States, Russia and China appear to be in use in the conflict, but that they do not appear to have been supplied by any of those countries directly.

"Both parties to the conflict received weapons and military equipment, technical support and non-Libyan fighters in non-compliance with the sanctions measures related to arms," the report said.