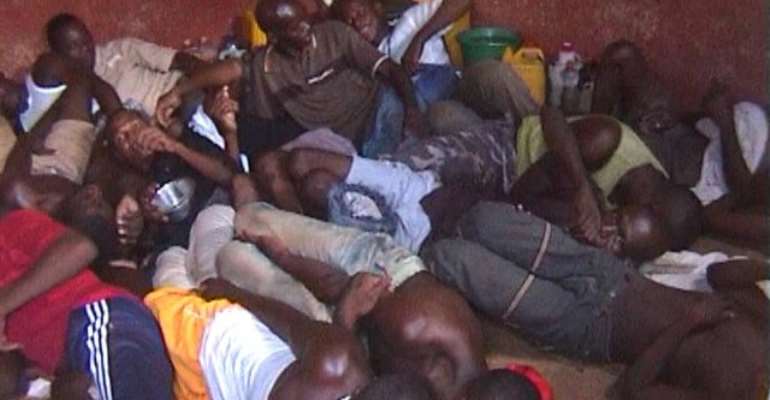 The Upper West regional director of the Commission on Human Rights and Administrative Justice (CHRAJ) has stated that the GH¢1.80 allotted for feeding inmates in Ghana’s prisons is woefully inadequate.

Sidik Ubeidu made the statement when he led officials of CHRAJ to inspect facilities at the Wa prison as part of the commemoration of human rights day.

Ubeidu, who went round the facility in the company of the Upper West commander of prisons, Christopher K Nyamedi also had audience with the inmates.

The inmates were not happy about the quality of food prepared for them at the prison.

''We know the GH¢1.80 is not enough but they can do better. The food prepared here is not good, there is no salt, no pepper and spices. If we were buying food from outside it would have been better,'' one of them stated drawing large clap from his colleagues.

The prison commander, however, disagreed with them.

“You shouldn't be surprised they came out with this type of complaint, it is normal,” he said, adding there is no way they would prepare food without those items.

The Wa prison was constructed to house less than 100 inmates. However, the number of inmates at the nine cells has ballooned to 177

Even with the convention of a storeroom the size of a football net to a cell, it has done little to solve the congestion puzzle at the prison.

Due to the high numbers, prisoners who are on remand are lamped with convicted prisoners.

The number of remand prisoners alone is 41. The Commander of the Prisons Service said there is little he can do to change the situation except for opting for transfers for the inmates.

This current situation was created by the arrival large number of remands coming in at the same time.

“The last time nine of them came and you can expect even the same number today. The figure kept on undulating,'' he said.

He suggested that the only way that the way that congestion could be solved at the central prison is for authorities to convert the Bayiri farms into prison.

Currently, the Ghana Prisons owns thousands of large hectares of farm at Bayiri and convicted prisoners are sometimes there for farming activities.

Mr. Nyamedi said if converted, it could solve the feeding challenges of the prisoners.

Mr. Ubeidu shortly after donating toiletries, soft drinks and some food items all valued at GH¢4,000 described the situation as unacceptable.