The Looming Kidney Disease Crisis: Will Ghana Be Able To Cope? 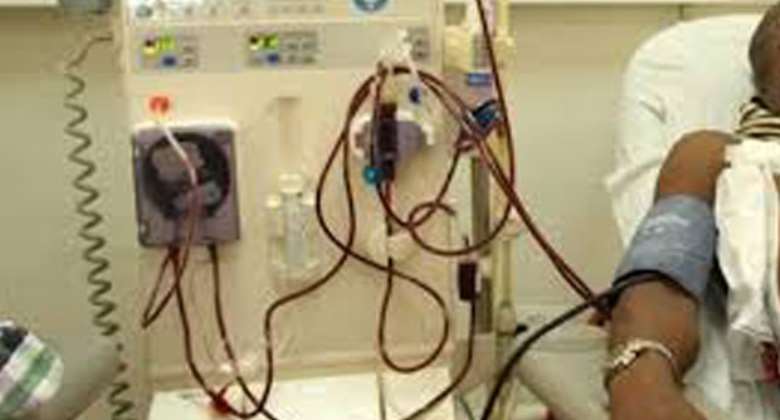 A patient on dialysis

Over the past weekend, it was revealed that doctors in Ghana were close to declaring kidney disease as an epidemic or medical crisis in Ghana.

The Dialysis Services Foundation made the disclosure as it organized an end-stage kidney disease and associated illnesses awareness campaign.

Chairman of the Dialysis Services Foundation, Prosper Bani, lamented that there were rising numbers of Ghanaians battling with kidney disease across the country.

According to him, judges, doctors, lawyers and Members of Parliament were all at risk of kidney disease.

He mentioned substance abuse, alcohol and poor eating habits, among others, as major contributors to kidney disease.

Statistics from the Ghana Police Hospital show that an average of 12,000 kidney failure cases are detected among Ghanaian patients every year.

About 10 percent of global population is reportedly affected by kidney diseases.

The 2010 Global Burden of Disease study reveal that Chronic Kidney Disease (CKD) was ranked 18th in the list of causes of total number of deaths worldwide.

The World Health Organization (WHO) reports that about 850 million people worldwide are now estimated to have kidney disease from various causes.

The Medical Director at the Ghana Police Hospital, DCOP Dr Iddi Musah, earlier stated that Ghana is faced with an alarming increase of the preventable yet deadly kidney disease.

About half the number of patients are losing their lives in Ghana, according to medical reports.

Dr. Musah said “the (global kidney disease) situation is no different in Ghana as an average of over 12,000 diagnosed kidney patients are recorded per year – a third of these losing their lives needlessly.”

CKD is believed to cause at least 2.4 million deaths per year.

A patient with chronic kidney disease has three options, according to Mr. Bani.

One option is to undergo dialysis; two is to do a kidney transplant and the third option he says is to die.

Medical statistics show that charge for each dialysis session in Ghana is about GH¢ 320.

A patient on dialysis is expected to visit the hospital three days a week for the dialysis, meaning every week he or she has to spend an amount of GH¢ 960 approximately.

Patients requiring kidney transplants in Ghana are mostly sent abroad, usually India for for the transplant, with the cost of such medical service running into thousands of dollars.

Mr. Bani added cost of treatment has become a serious burden for patients.

The question then is with Ghana still struggling to meet the basic health needs of a significant number of its citizens, how will it cope financially when it hits the kidney disease epidemic level?

To be sure of the financial challenges the country is facing in its health sector, Health Minister, Kweku Agyeman-Manu says “the National Health Insurance Scheme was almost collapsed in the last eight years under the last NDC government led by former president Mahama.”

The NHIS has for many years been in arrears when it comes to settling hospitals that provide services to Ghanaians.

Dialysis Services Foundation is working to educate the nation about the menace of end-stage kidney disease and associated illnesses.

March 14th is world kidney day and this year's celebration theme is; Kidney Health for Everyone, Everywhere.

Mr Bani has therefore called for a healthy lifestyle amongst Ghanaians.