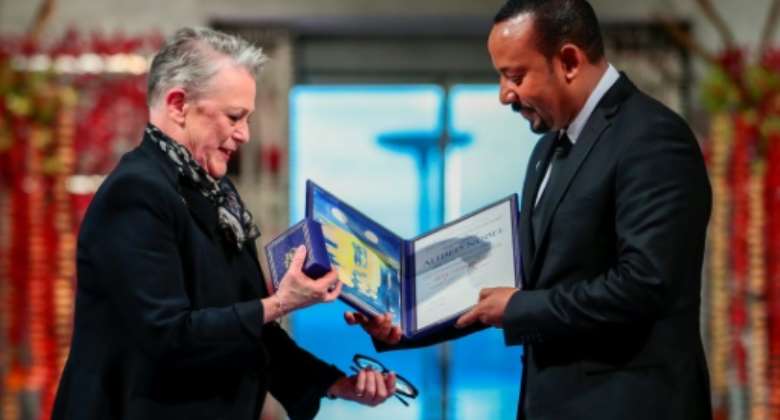 Ethiopian Prime Minister Abiy Ahmed collected the Nobel Peace Prize in Oslo on Tuesday, appealing for unity as ethnic violence flares in his country and reconciliation efforts with former foe Eritrea have stalled.

"There is no 'Us and Them'," he said in his speech at Oslo's flower-bedecked City Hall. "There is only 'Us', for 'We' are all bound by a shared destiny of love, forgiveness and reconciliation."

The Nobel committee honoured Abiy -- Africa's youngest leader at 43 -- for the spectacular progress in the months after he took power in April 2018.

Just months into his premiership he met Eritrean President Isaias Afwerki to formally end a stalemate that had dragged on since a 1998-2000 border conflict.

He has pushed to introduce democratic elections in a country long ruled by authoritarian governments and played a wider role as a mediator in East Africa.

But the winds have since shifted -- some of his domestic reforms have fuelled a flare-up of ethnic tension and outstanding issues with Eritrea have once again come to the fore.

Faced with these challenges, he called for unity as he picked up his award in a formal ceremony attended by the Norwegian royal family and dignitaries.

During his speech, Abiy was quick to praise Afwerki as his "partner and comrade-in-peace" -- the only leader Eritrea has known since it gained independence from Ethiopia in 1993.

Map of Ethiopia and Eritrea and the history of their relations.. By (AFP)

"We understood our nations are not enemies. Instead, we were victims of the common enemy called poverty," he said.

A former soldier, Abiy also spoke of the ravages of war, recalling how his entire unit had been wiped out in an Eritrean artillery attack but he had survived after briefly leaving a foxhole to get better antenna reception.

"War is the epitome of hell for all involved," he said.

During the lightning-fast rapprochement that followed the peace deal with Asmara, embassies reopened, flights resumed and meetings were held across the region.

But the "Abiymania" hype has faded and he is now facing major challenges.

During the lightning-fast rapprochement that followed the peace deal with Asmara, embassies reopened, flights resumed and meetings were held across the region. By Fredrik VARFJELL (AFP)

The land border between the two nations is once again closed and the question of border demarcations is unresolved.

"At present, this work seems to be at a standstill," said the head of the Norwegian Nobel Committee, Berit Reiss-Andersen.

"It is the hope of the Norwegian Nobel Committee that your previous achievements, coupled with added encouragement of the Peace Prize, will spur the parties to further implementation of the peace treaties," she added.

Abiy has vowed to hold the first "free, fair and democratic" elections since 2005 in May, and experts fear the Ethiopian leader may have to shift his attention away from the peace process to focus on the vote.

In stark contrast to his authoritarian predecessors, Abiy has lifted the state of emergency, released dissidents from jail, apologised for state brutality and welcomed home exiled armed groups.

The ceremony took place at the Oslo city hall, with Abiy denouncing the "evangelists of hate and division" who he said are "wreaking havoc in our society". By Fredrik VARFJELL (AFP)

But less than two weeks after the Nobel announcement in October, anti-Abiy protests left 86 people dead.

In his Nobel speech, he denounced the "evangelists of hate and division" who are "wreaking havoc in our society using social media".

Meanwhile, the Nobel festivities have been tainted by Abiy's refusal to field questions from the media.

Nobel Institute head Olav Njolstad called the decision "highly problematic", noting that a "free press and freedom of expression are essential conditions for a lasting peace in a democracy".

Abiy's entourage responded that it was "quite challenging" for a sitting leader to spend several days at such an event, especially when "domestic issues are pressing and warrant attention".

They also said Abiy's "humble disposition" contrasted with "the very public nature of the Nobel award".

The other Nobel prizes for literature, physics, chemistry, medicine and economics were also handed over on Tuesday, in a separate ceremony in Stockholm.

Fighting your husband's side chicks is wrong; you could even...
44 minutes ago