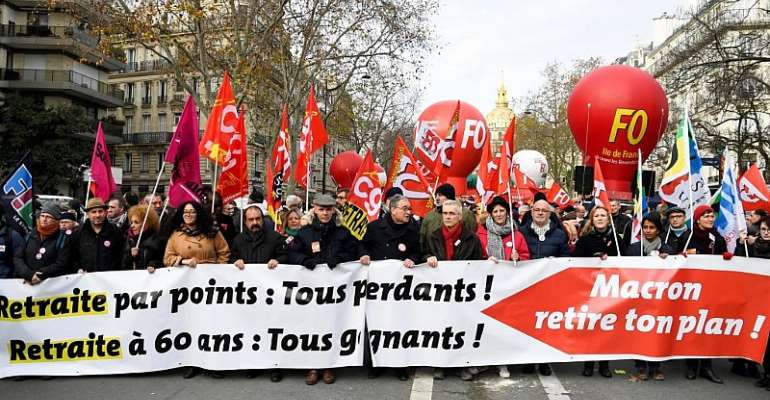 Public sector workers marched in cities across France for the second time in less than a week on Tuesday as a strikes against President Emmanuel Macron's plans to overhaul the country's pension system continued for a sixth day.

Public services were disrupted around the country for a sixth day, especially in the capital, with only two of 16 metro lines offering full service and nine completely closed. Suburban RER trains were also disrupted.

French teachers staged a walkout and forced school closures for the second time in less than a week. Education Minister Jean-Michel Blanquer said the effects were felt in Paris the most, with around 35 percent of teachers walking out, compared with 12.5 percent nationwide.

Strikes also led airlines to cancel 20 percent of flights and for oil refineries to halt distribution.

Unions urged rail workers, doctors and other public workers to also strike in hopes of keeping up participation in the largest challenge organised labour has made to Macron since his election in 2017.

French government to announce reform
Last Thursday's first marches against the reform drew 806,000 people around the country, according to the government, while the CGT trade union federation claim as many as 1.5 million people participated.

Many participants in last week's marches accused Macron of trying to roll back the country's costly but cherished public services.

Prime Minister Edouard Philippe is slated to unveil plans on Wednesday of how the government intends to replace France's 42 separate pension plans with a single points-based system that would require people to work longer.

Philippe is expected to make concessions aimed at getting the changes through, even though unions have sounded an uncompromising note so far, saying they will not call off the strike unless the pension reform is scrapped entirely.

Savannah: NADMO to clear buildings on waterways after heavy ...
8 minutes ago