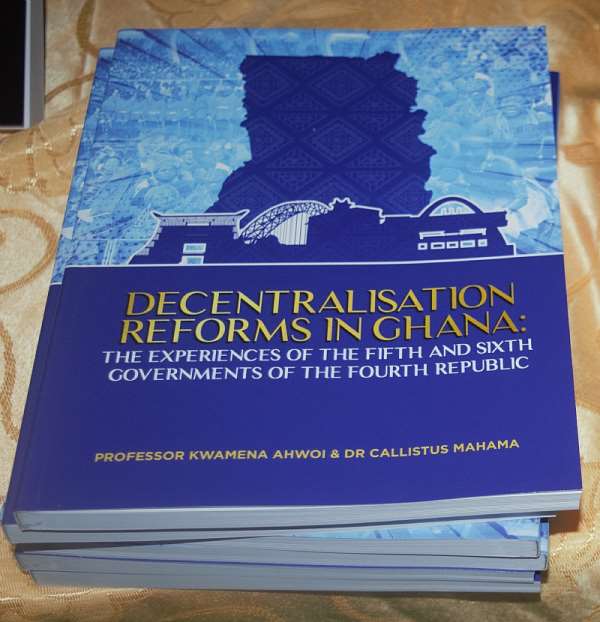 He recounted how his administration benefited from the fountain of wisdom of the duo which led him into making certain important decisions and reforms in the local government system.

Officially launching the Book co-authored by Prof. Kwamena Ahwoi and Dr. Callistus Mahama titled “DECENTRALIZATION REFORMS IN GHANA: THE EXPERIENCES OF THE FIFTH AND SIXTH GOVERNMENTS OF THE FOURTH REPUBLIC” at the British Council in Accra, Mr. Dramani Mahama pointed out that it took the wisdom and ingenuities of the two professionals for his government to realise that the key institutions like the Ghana Health Service and Ghana Education Service that were actually supposed to form key part of the decentralization had been exempted from the process.

“So even though we had district chief executives, institutions that should report to the chief executives were reporting to their central ministerial authorities. It was decentralization in name but the actual legal status were not properly put in place.”

However, the new book “Decentralization Reforms in Ghana: The Experiences of the Fifth and Sixth Governments of the Fourth Republic” was published by Winmat Publishers Limited in 2018, has about 188 pages, a foreword by His Excellency John Dramani Mahama, former President of Ghana.

The five sets of appendices provide a ready reference to the relevant legislation (appendix 1), constitutional instrument (appendix 2), legislative instruments (appendix 3), a personality index (appendix 4) and a general index (appendix 5). The book provides a good listing of documents, reports and literature that serves as references for researchers, legislators and other parties who would be interested in work that has gone on in Ghana’s decentralization experience particularly between 2009 and 2016.

The authors, Prof Kwamena Ahwoi and Dr. Callistus Mahama used an interesting choice of words in the first paragraph of the preface, describing the period between 2009 to 2017 as one of the “unprecedented frenetic activity in the area of decentralization reforms and their implementation”.

Chapter one of the book provides a valuable whistle-stop tour of Ghana’s efforts at decentralizing administration and development management as well as the antecedents of the assembly system of local governance.

The last chapter sets out the agenda that the seventh government was expected to address. In the area of political decentralization, this included the constitutional review commission’s recommendations such as making the local government system partisan. Another was the future of the Inter-Ministerial Coordinating Committee (IMCC) and its relationships vis a vis the Ministry of Local Government and Rural Development and Local Government Service.

The Book also reflects on an institutional dilemma that bedevils the nation, the merger of social welfare and community development at the district level; whether it is feasible or still relevant, given that the Book indicates that the Department of Gender, Social Protection and Community Development was envisaged as administrative reform. An important discussion in that chapter is around disability issues and decentralization of national obligations to realizing their rights.

Another important agenda item is to develop the LEAP programme to the district level. The chapter concludes that popular participation should result in job and employment creation opportunities; and there should be effective dissemination of information about decentralization and local government best practices.

The first copy of the book was bought by the former President, John Dramani Mahama at GHC5,000.