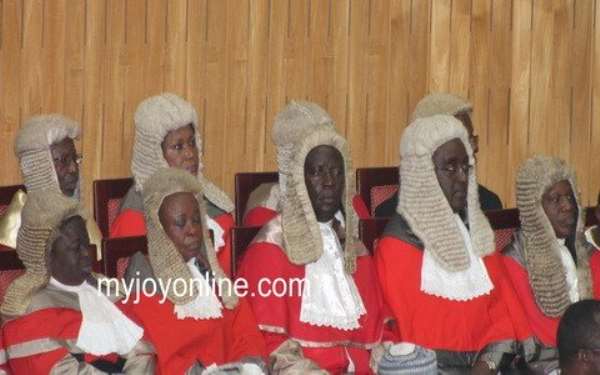 Appeals Court judge Justice Gertrude Torkornoo has backed calls for reforms in the dress code of the judiciary to reflect values and conditions in the country.

Answering a question regarding the weather conditions in the country and doing away with colonial relics, she told Parliament’s Appointment Committee, Tuesday that she thinks they will look good in local fabrics.

Justice Gertrude Torkornoo is one of the three female Appeals Court justices promoted to the Supreme Court by the President.

Her comment about the judiciary’s dressing follows decisions by other jurisdictions to review the wearing mandatory gear in courtrooms over convenience, aesthetic and anti-colonial sentiments.

Former British colonies including Ghana, Kenya and Zimbabwe continue to abide by the UK legal system which requires the wearing of wigs and robes for judges and lawyers.

Malawi, another former colony in November this year, had their constitutional court suspend the wearing of traditional white wigs and black robes in the courtroom as temperature levels in the country kept soaring.

Responding to a question posed by North Tongu legislator, Samuel Okudzeto Ablakwa, Justice Torkornoo said, “I wish we could even wear African print rather than black suits.”

In November 2017, Chief Justice Sophia Akuffo directed that judges wear wigs during court sittings to among other things “to preserve the uniqueness of the work of judges and the legal profession” and “restore the formal nature of court proceedings and eliminate the creeping casualness in the system.”

However, Chairman of Parliament’s Appointments Committee, Joseph Osei-Owusu believes the status quo must be maintained.

“I wish she [Justice Gertrude Torkornoo] never gets the opportunity to decide what we wear. For those who don’t want to be lawyers, there is the option of becoming other.

“If you choose to become a lawyer, you must live by the tenets of the profession,” the legal practitioner responded.