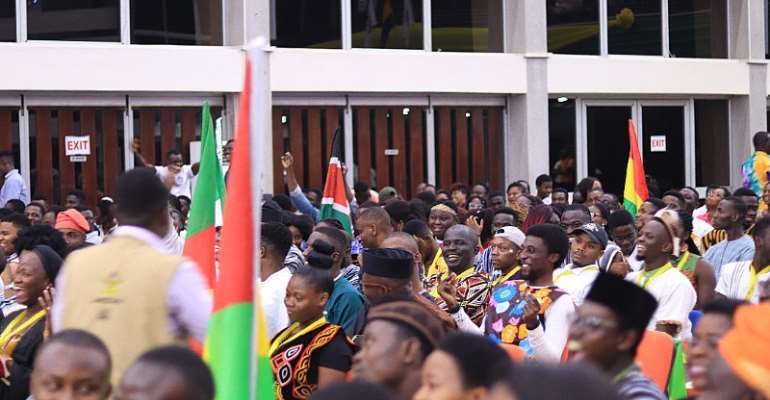 The 12th edition of the Pan African Universities Debate Championship has been officially launched at a colorful ceremony at the Kwame Nkrumah University of Science and Technology (KNUST).

The PAUDC which hosts Debaters and Judges from various African Universities begun on Sunday, 8th December 2019 with arrival and registration of participants.

The 2019 edition is christened AKOFENA which signifies courage and valor. It is expected to come to an end on the 16th of December 2019.

Spearheaded by a Local Organizing Committee and the Sports Directorate of KNUST, the tournament is under the themes; "Redefining the African Narrative" and under the auspices of the Chancellor of KNUST and King of the Ashanti Kingdom, His Royal Majesty Otumfuor Osei Tutu II.

The opening ceremony which took place on Monday December 9, 2019 saw representatives of all 16 countries participating in the championship.

In attendance were former Vice Chancellor of KNUST, Professor Otoo Ellis, Provost of all six Colleges in KNUST and a host of several other dignitaries.

In his opening remarks as Chairman of the occasion, Professor Otoo Ellis underscored the need and aim for all participants and everyone to make the best out of this yearâ€™s tournament.

As KNUST who were winners of the 2018 edition look to defend the title, he was optimistic that the trophy will remain on the best schoolâ€™s (KNUST) soil.

â€What makes it more interesting is that this yearâ€™s PAUDC is being hosted on the land of the best school with the best debaters in Africa and it is my hope that the trophy remains in KNUST, he said.

Preliminary Rounds begins on Tuesday, December 10 for all teams.

Day 3: Line up of activities

PAUDC is the Pan African Universities Debate Championship that hosts Debaters and Judges from across Universities in Africa.

The format for the Debate is the British Parliamentary format popularly known as BP.

The competition began in 2008 in Botswana, and KNUST; Ghana is hosting the 12th edition after the University of Ghana hosted in 2015 making this the second time a Ghanaian institution is hosting the event.