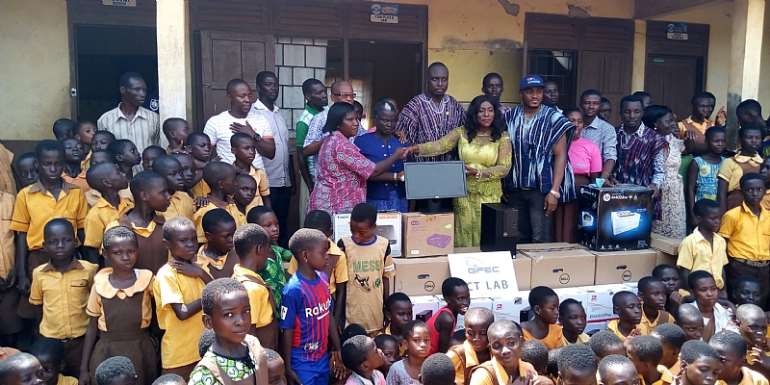 The Minister of State at the office of the Senior Minister, Mrs. Catherine Afeku has initiated prudent measures to empower school children in Nzema East Municipality of Western Region.

In this regard, she has donated Information and Communication Technology (ICT) tools to selected schools assist in teaching and learning of ICT.

She showed this kind gesture to Dr. Beamish Basic School at Axim and Nyamebekyere Basic School.

The donation was made possible through the help of Ghana Investment Fund for Electronic communications (GIFEC).

Making the presentation, Mrs. Catherine Afeku who is also the Member of Parliament (MP) for the area charged the beneficiary pupils to make good use of the ICT tools.

She, therefore seized the opportunity to advise the pupils to stop patronising nightclubs, irrelevant entertainment centers, which could bring their educational career to an end.

She also urged them to handle the computers and its accessories with care for them to last longer.

The MP challenged the school children to use one Beatrice Kwaw who was selected from the school to represent the Municipality in a Regional Competition dubbed "Girls in IT" as their role model to become Programmers.

She commended the girl for lifting the image of the Municipality at the highest level.

Mrs. Afeku pleaded with teachers in the area to help the school children to learn the ICT, using the tools to become IT literates in future, so they can help the country.

She promised to buy Typing Software machines to the schools for the children to become fast in typing.

She also promised to extend the gesture to other schools within the Nzema East Municipality.

On his part, the Municipal Chief Executive (MCE) for the area, Hon. Frank Okpenyen disclosed to the pupils why the Member of Parliament for the area lobbied for the ICT tools from GIFIC.

He charged management of the beneficiary schools to ensure good maintenance of the equipment.

Speaking at the Nyamebekyere Basic School, the MCE urged the children's parents to instill discipline in their children.

He also appealed to the parents to pay keen attention to their kids and stop them from going out for entertainment, but encouraged them to stick to their studies.

The MCE, seized the opportunity to urge children to learn hard and become future journalists, MPs, lawyers, IT Programmers, Municipal Chief Executives among others.

On her part, the award winner Beatrice Kwaw who is a final year student of Dr. Beamish Basic School shared her excitement with her colleagues and thanked her ICT teachers for helping her to achieve this great success.

She urged them to take ICT classes as serious as other subjects to become like her.

The School Heads applauded the MP for supporting their schools to empower their pupils to become IT experts in future.

They, however, appealed to other benevolent organizations to help them with more ICT tools.

They promised to protect the machines for them to last longer in order to achieve the intended purposes.

They used the opportunity to admonish parents in communities to as a matter of prime concerned, invest massively towards their children's education.

The entire school children became so excited and thanked the Member of Parliament for the area, Catherine Afeku for the kind gesture.

They assured the MP of utilising the opportunity offered them and also promised not to engage themselves in bad behaviours that would end their education.

Meanwhile GIFEC has selected one of the ICT teachers of the school to go for some form of training to come back and transfer the knowledge to the school children.