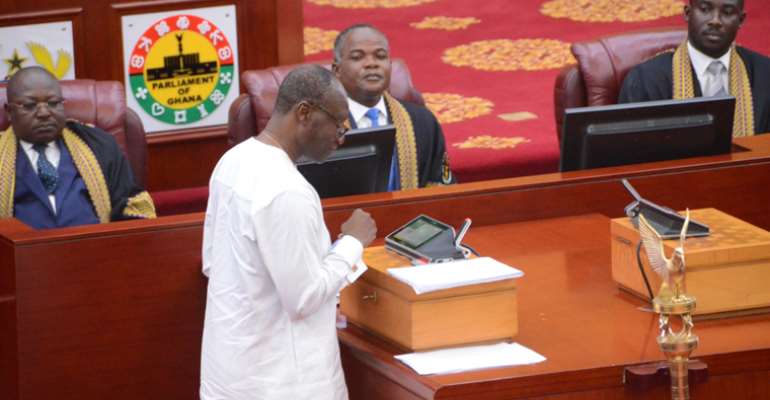 The Ministry of Finance is seeking Parliamentary approval for a GH¢15.6 billion bail-out to enable it sort out customers' deposits and investments which are locked up with some insolvent banks and financial institutions.

The request, which has already received executive approval from President Akufo-Addo, is also targeted at improving the liquidity of the financial sector.

Even though the minority has created the impression that the Finance Ministry's request has been disapproved, Kojo Oppong Nkrumah, Minister of Information and a member of the Finance Committee of Parliament, said the committee, which held a meeting on Thursday, received government's request and went further to explore if government could spend a bit more on the exercise.

He said the report of the committee would be presented to the plenary soon for approval.

An Asset Quality Review (AQR) on commercial banks conducted by the Bank of Ghana (BoG) in 2015 revealed that 20 banks, mostly indigenous ones, had impairment in loan books, capital deficiencies, credit concentration in the energy sector and some latent vulnerabilities in the banking industry.

Such banks according to BoG required additional provision for loan losses as their capital adequacy ratio (CAR) fell below the required 10 per cent.

According to the BoG, by 2017, some banks showed visible liquidity challenges, with clients unable to withdraw money from their accounts.

“Despite all these weaknesses identified in the ailing indigenous banks, BoG continued to provide them with liquidity support in addition to directing them to reclassify all downgraded facilities and book the appropriate provisions… Unfortunately, most of the indigenous banks that were failing could still not comply with these directives,” a recent memo from the Finance Ministry to Parliament indicated.

It said the indigenous banks subsequently petitioned President Akufo-Addo to assist and the president set up a committee to fashion out ways by which the banks could get government support.

Following the work of the committee, Ghana Amalgamated Bank, a Special Purpose Vehicle (SPV) was created to mobilize funds and support the five indigenous Banks to meet their minimum capital requirements.

A memorandum sent to Parliament indicated that out of the money for which the approval was being sought, GH¢11.2 billion would be used to bail out nine indigenous banks which are solvent but do not have the minimum capital required per new BoG directives.

In all, GH¢14.33 billion has been earmarked to bailout banks, microfinance industries, savings and loans companies as well as securities and exchanges commission while another GH¢1.25 billion is to be pumped into liquidity interventions bringing the total amount to GH¢15.58 billion.

“ Parliament is respectfully requested to consider and approve expenditure of up to GH¢15.6 billion for the bailouts of depositors and investors; and for ensuring that liquidity in the financial system is improved thereby safeguarding the financial sector and the economy. This amount covers all the fiscal interventions in the financial sector starting 2017,” the Memorandum signed by the Finance Minister, Ken Ofori-Atta indicated.