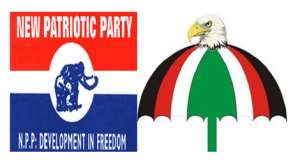 The Center for Democratic Development (CDD) says apathy ahead of the 2020 election may worsen if the expectations of the citizenry are not met.

The CDD says there's the need for political parties to fulfil their campaign promises after winning elections.

This follows its latest Afrobarometer report which revealed that 12 percent of Ghanaians are unsure they will vote for any political party in the 2020 elections.

The report also showed that this percentage is the highest so far since 2008, after increasing by six points in the last two years.

But Research Analyst with the CDD, Geofred Asiamah, in a Citi News interview said, it is time political parties focused on meeting the expectations of voters.

Although the research comes at a time when momentum is beginning to be gathered by political actors ahead of the 2020 elections, producers of the Afrobarometer report said it is impossible to draw solid conclusions about a

likely election outcome since some of the respondents did not declare their votes.

When asked which party's candidate they would vote for if presidential elections were held the following day, more than four in 10 Ghanaians (42%) said they would either not vote (11%), did not know who to vote for (12%), or refused to answer the question (19%).

Majority of those who responded in the affirmative declared support for the governing New Patriotic Party (NPP) over the National Democratic Congress (NDC) although the former's preference shrunk by 15 points.

According to him, the fact that only 34 per cent of Ghanaians say they will vote for the incumbent party, shows that the NPP government has lost a lot of goodwill from the populace.

“If we do all the extrapolations, all things being equal you will see clearly that the NPP has lost strong support from the populace. You don't even need the polls to tell you– You go on the streets, you go to the banks, the hospitals and the classrooms [and ask poeple. You will understand what I'm saying],” he said.

The governing New Patriotic Party (NPP) has blamed Ghanaians being indecisive on who to vote for in the upcoming national polls on the NPP still refixing the poor economy they took over from when coming into power.

It’s Communications Director Yaw Buaben Asamoa said the citizens are indecisive because their expectations have not been met yet since they are still building the country and will eventually decide as time goes by.

“So you have to take that survey overall and look at the in-built frustration of the system that we have where you have a government come in and literally drag us all the way back. And when another government comes in, the expectation of the people is that having being dragged that far back, they will be rebounded quickly but the problems the Mahama administration left us are such that they [Ghanaians] inevitably feel this thing that their expectations haven't fully been met yet so they're waiting.”