Revving up to a new speed record in the Kalahari 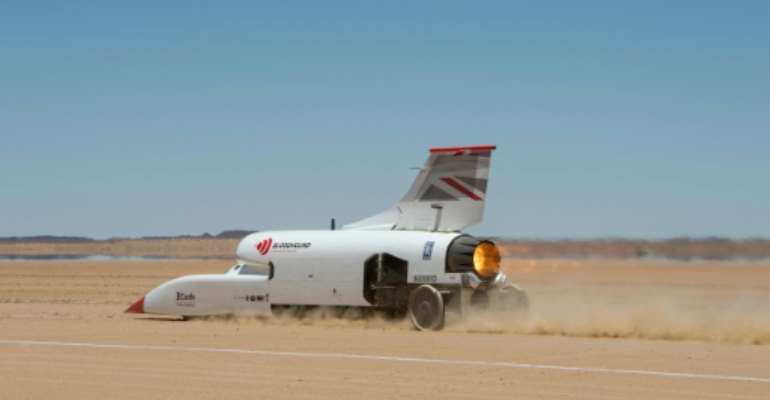 The "Bloodhound" is gearing up to try to break the current land speed record. By RODGER BOSCH (AFP)

A loud hiss rips through the stillness of southern Africa's Kalahari Desert.

It sounds like a fighter jet flying low over the Hakskeen Pan, an isolated dry lake bed in South Africa's Northern Cape province, near the Namibian border.

Then a thick cloud of sand appears on the horizon, growing steadily as it draws near.

In the blink of an eye, a racing car shoots by with a deafening screech and pelts towards the opposite end of the salt pan.

The "Bloodhound" is gearing up to try to break the current land speed record, which stands at 760 miles per hour (1,223.657 kilometres per hour).

There's still a way to go before the super racer is ready for that attempt, but today driver Andy Green is pleased.

The British-built super racer was put to the test in the southern African Kalahari Desert. By RODGER BOSCH (AFP)

The British-built Bloodhound stands sleekly behind him, dust still hovering in its wake.

The white parachute that helps it brake lies crumpled on the cracked ochre soil.

"Good parachute deployment," adds the Briton, as the vehicle is towed into a large air-conditioned tent nearby.

"That's pretty much the perfect run," he says.

The Bloodhound was designed exclusively for speed -- the team hopes, if possible, to get up to 1,000 mph.

The vehicle resembles a wingless jet on aluminium wheels, with a long white body topped by an engine and a stabiliser.

Its design is miles ahead of the bullet-shaped electric car in which French aristocrat Gaston de Chasseloup-Laubat set the first land speed record on December 18, 1898 -- pushing the vehicle's spoke wheels to 63.15 kph.

RAF pilot Andy Green is the driver of the Bloodhound, built exclusively for speed. By RODGER BOSCH (AFP)

"You can call it that, a jet engine with wheels, but it's far more sophisticated than that," said Stuart Edmondson, head of Bloodhound operations.

"The car, as it is a car, has a steering wheel, has a throttle pedal, has a brake pedal," he told AFP.

It was recycled from three decommissioned versions of the Typhoon's engine, released by Britain's defence ministry, "without the handbooks", chuckles a Bloodhound team member.

Bloodhound will aim to top the current land speed record of 760 miles per hour (1,223.657 kilometres per hour). By RODGER BOSCH (AFP)

"It's a car designed to go at 1,600 kph," said Chapman, adding that at top speed it would be almost 400 kph faster than a Typhoon at the same altitude.

"The big issues were aerodynamics, keeping it on the ground," he said.

As the engine's nine tons of thrust are still unable to break the sound barrier, Chapman and his team plan to give it a boost with... a rocket engine.

Green is not intimidated by the prospect. The 57-year RAF pilot has held the current land speed record since 1997.

But the skills and the "second by second" decisions needed to stay in control are like flying a jet fighter "at the limits of its performance", he added.

The Bloodhound team plans to give the racer a boost, with a rocket engine. By RODGER BOSCH (AFP)

"The car starts to move around at about 300 kph, at 350 kph it starts to almost skate on the surface," he said.

"It's like driving on hard packed snow in a normal car."

At such high speed, the slightest mistake or technical glitch can be fatal.

In August, the American professional racer Jessi Combs was killed during a test-run for a land-speed record attempt in Oregon's Alvord Desert in the United States.

In the Kalahari, safety is managed by the Bloodhound team's only female member, Jessica Kinsman.

The 39-year-old air traffic controller makes sure to minimise any source of danger along the 16-kilometre (9.9-mile) desert track.

Jessica Kinsman, 39, is an air traffic controller who oversees the Bloodhound's safety. By RODGER BOSCH (AFP)

Nothing escapes her eagle eyes, be it the wind factor, obstacles or a slight anomaly in the vehicle's motion.

"Here, it's almost an airfield, there is a runway, there is an aircraft, more or less," said Kinsman comparing the car to a plane, from her viewpoint overlooking the desert in the elevated glass-faced control station.

"We have the final say on a number of things," she added, with a smile.

Meanwhile, a man discreetly oversees the mechanics as the team busies itself around the Bloodhound in the cool-aired tent.

He saved the failing project last year by buying the Bloodhound, which was on the verge of being dismantled and sold as spare parts.

"I have certainly spent sums of seven figures (in pounds) to get here," Warhurst told AFP.

Ex-owner of a turbocharger manufacturer in Britain, he said that amount was "nothing" compared to money "you need to spend for projects like, say, Formula 1 teams".

The Bloodhound resembles a wingless jet on aluminium wheels, with a long white body topped by an engine and a stabiliser. By RODGER BOSCH (AFP)

Warhurst, 50, who retired last year after making his fortune, defended his new carbon-intensive hobby as a source of "inspiration".

Breaking the record "would obviously be an amazing thing", he said.

"But it's the journey to get there that is really exciting."

Bloodhound owner Ian Warhurst says he has "certainly spent sums of seven figures" to get to where they are now. By RODGER BOSCH (AFP)

And he said that he hoped the team's work would inspire others to advance new technologies, especially in becoming carbon neutral.

"So if we can help to inspire engineers to do that, then we're doing our part," Warhurst said.

The millionaire said that he hoped the tests in South Africa would help attract other investors.

This desert tryout, which took place between late October and mid-November, has seen the Bloodhound's speedometer needle creep up to 1,010 kph.

The car is now headed back to its home base in Britain for more tweaking and the new rocket engine, before its expected return to the Kalahari by mid-2021 for another attempt.

Green is already excited at the thought.

"I'm very confident there is nothing on the planet with the capability that Bloodhound car has," he said.

"I'm confident we are going to break the record."