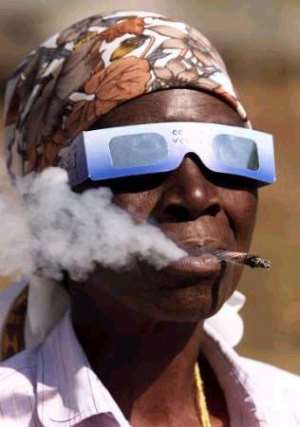 ... Nation anticipate total solar eclipse For millions of people on the southern third of Ghana, March 29, 2006 is a day they are anxiously waiting for. But they are not alone, thousands of tourists are also arriving in the West African state. All hotels in the southern third have been booked. Journalists and scientists are also arriving to watch the same event - total eclipse of the sun. Ghana would be the first country in Africa to experience the phenomenon when the moon blocks the sun`s light as viewed from the earth. Ghana, Togo, Benin, Niger, Nigeria, Chad, Libya and Egypt will be the African countries to experience the phenomenon. And this comes once in a very long time. The last time Ghana experienced a total eclipse of the sun was in 1947 and some of those who experienced it say they are looking forward to another wonderful experience. "It was wonderful and I thank God I would be alive to experience it once more," said Beatrice, 77. Ghana, which has been trying to put itself on the tourism map, is taking full advantage of the phenomenon to advertise itself. Large numbers of foreign tourists are expected and tour operators are putting finishing touches to packages that would transport foreign and local tourists to strategic locations for good viewing. Ferdinand Ayim, chairman of the National Planning Committee on the Solar Eclipse, said Ghana would have a free advertisement to boost the tourism industry. Also expected are journalists and scientists, as the event would be beamed live across the world. The Planning Committee has been stepping up its education programme, especially warning the population not to view the phenomenon with their naked eyes as this could destroy the eyes. Special eclipse goggles have been imported and are being sold at a subsidised price of 10,000 cedis (about $1.10). But fraudsters have cashed in selling fake goggles that could end up destroying the eyes of the people. "Some unscrupulous persons are manufacturing and putting on sale fake solar shades to the general public," Ayim said. "This is not only dangerous and injurious to the eyes but also criminal and nation wrecking," he said. As the excitement mounts, religious leaders are also putting their interpretations on the event. An Islamic scholar, Mallam Muniru Hamidu said the event would be one of the signs of "the world coming to an end". He said the Quoran states that when the end of the world is near, God would cause the sun and the moon to come together. The time when Muslims beat drums and make noise during an eclipse must stop, as they are anti-Islam. Rather, they should go to the mosque and pray.
It is a divine phenomenon, said Rev. Isaac Quansah, who added that it would "give people an experience of a lifetime that God is real".
"This shows that God controls the affairs of not only man, but all heavenly constellations and mankind should therefore be in awe of Him."
The authorities may have a big task on hand on Wednesday that the phenomenon does not add to the list of some 200,000 blind people.

Covid-19: Headache, body pains show the vaccine is working i...
38 minutes ago