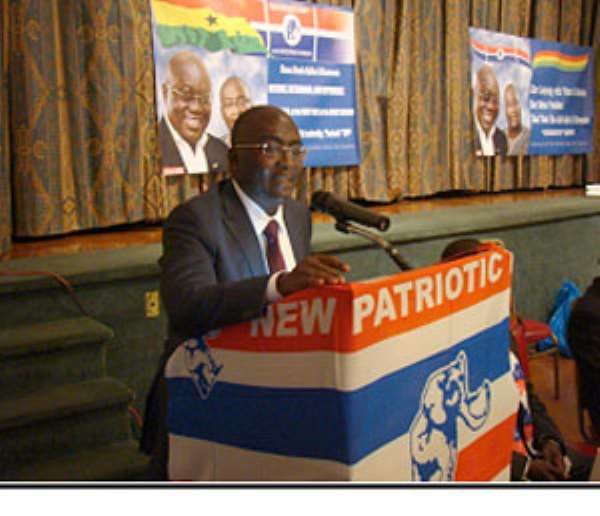 "You do not blame your shadow for the shape of your body: just the same way: Do not blame others for your experience" said Gilliam Duce. Accusing and blaming others for your woes blinds you from identifying the causes of your woes. Dr Bawumia's focus is on Former President Mahama instead of doing soul searching. He is just projecting bad feelings at the former President just to set him up as bad so he can cover his shame and abysmal performance. The blame culture is rather making demeaning the already low image of the current administration. The truth is that, the culture of blame has taken over the Akufo-Addo government. They always want to appear good or better but because they are not faring as expected, they have defaulted to envy. It's easier to blame innocent souls than accept responsibility. That's why Bawumia and his apostles default to pointing fingers. He has become addictive to the blame game culture. Regardless of how well he plays it, he will never win. We have never had a Vice President ill informed about the nature of his office, so openly mendacious, so reckless, incompetent and self destructive, or so brazen in his abusive attacks on his predecessors, political opponents and senior political figures. It is unfortunate that, for the ruling Npp that won the 2016 election on a promise of CHANGE, the blame game culture has become a refrain ad infinitum, to justify its inability to fulfill the promises it captured in its manifesto, why it cannot point to one major project executed from the over Ghc 200 billion borrowed and billions of cedis of oil revenue it has received. The Vice President's allegations against the previous administration are not only lame and dubious, that fixation also prevents him from looking forward and see ahead.

There is a saying that one who cannot take heat should simply get out of the kitchen. Ghanaians did not vote for the present government to listen to endless complaints and passing of blame ad nauseam. This government was entrusted with leadership to fulfill the promises they captured in their manifesto including, $1 million for each constituency annually, stop borrowing for projects implementation, stop corruption and nepotism, reduce price of fuel, create employment, stabilise the cedi, improve security, build 350 new secondary schools, build dams in villages in the north etc etc. It is the duty of every responsible government to seek to make better the situation it inherited and anything less than this sacred duty is a celebration of gross incompetence. The Vice president must stop forthwith, his fixation on the past and work. Is the Vice president telling us that President Mahama is responsible for the scandal at Bost?, the Ameri scandal, the PDS scandal, the sharp depreciation of the cedi, the Maritime Authority scandal, the Ghana lottery Authority scandal, the Kelni GVG scandal, the terrible Transparency International report, the latest Afrobarometer reports? Must he (Dr Bawumia) be blamed? His office has been rendered impotent, useless and Irrelevant so using attacks on the former president to repair his damaged image and make his office potent. He's been stripped off the powers given to him to make decisions and approve contracts, annual reports, chair the economic management team and other key functions under his agencies. He is just there as the Vice President with no special role to play. The Senior Minister and Economic Management committees formed by the President have taken over his position rendering him Irrelevant. President Mills gave his Vice John Mahama limitless space to operate as head of his economic management team and we saw his exploits culminating in that unprecedented 14 percent inflation figure. Ghana's economy was rated the fastest growing economy in the world under Mahama's control (head of the economic management team). He is not an economist but was able to achieve this enviable record. Ghanaians are still waiting to know the remaining 90% Togolese you claimed were registered to vote in Ghana. The constituencies are waiting to receive the $1 million you made noise about. What about your cashless initiative? And the achievements you claimed your government had made when you appeared on the ASK BAWUMIA show on Joy FM. Businesses are collapsing, people are losing their jobs, investors are leaving our shores, prices of goods are skyrocketing, banks are collapsing, unemployment is rampant and your solution to these problems is the introduction of large denomination notes?. Your government and the economic management team have refused to come with and implement innovative ideas that will create new jobs, multiply our revenue exponentially, drive our export numbers up, improve the lives and living condition of Ghanaians and make Ghana the number one hub for business, manufacturing and retail in the subregion. President Mahama appointed intelligent, forward looking and mature young people into his administration and the result was - Ghana becoming the best place for doing business in West Africa, the number one in West Africa in human development index, and the Cedi rated the second most stable currency in the subregion.

Mr Vice President, emptying the boats in your life will stop you from blaming others. Ghanaians are worried because of the office he occupies. The Vice President office is respected and revered across the world and we pray the Most High God direct his ways to enable him change his ways, and apply fully his skills in economics.