Teachers Strike: Why it May Not be Called Off Sooner 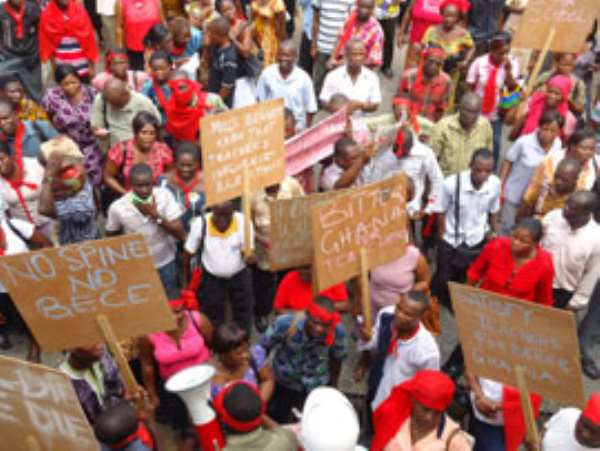 On Thursday 5th November, 2019, the three major teacher unions held a joint press conference, declaring an indefinite strike action over non payment of salary arrears of some teachers. The strike action was preceded by a caution last week for government to pay the legacy arrears to teachers owed between 2012 and 2016.

These arrears accrued as a result of government's three - month payment policy which largely affected then newly trained teachers and those promoted to various ranks who had worked for several months. Even though there have been some payments by the current government, the teacher unions believe that most of their members have still not been paid, hence their industrial action.

Barely few hours after the declaration of the strikes, a letter was issued by the Ghana Education Service's Director General, Prof. Opoku Amankwa, declaring the strike as illegal whilst expressing shock at the union leaders for their action. According to him, leadership of the unions acted in bad faith having agreed to a December ending timeline for the settlement of the legacy arrears. It was also stated that the GES have identified some anomalies in payment such as overpayments and wrongful payments and would wanted to correct them, hence the delay in payments.

Since the above anomalies only involved some five hundred teachers, why should the over ten thousand teachers who have no problem with their documentations and validations be affected and denied payment? Is it not a matter of separating the few with problems from the genuine ones as suggested by the GNAT national chair, Madam Philipa Larson? Even that, it is no fault of any teacher to be overpaid or wrongfully paid. It is solely the fault of the GES and that teachers should not be made to bear the consequences of the errors of someone.

The water seem to have been muddied further by the non inspirational posture of the Ministry of Education who seem to politicize almost every effort of teachers to demand their due. In an interview with Asempa FM's Osei Bonus during an NPP youth programme in the Northern Region, the Minister of Education, Hon. Matthew Opoku Prempeh accused the opposition NDC of being behind the strike action. His comments have met the fury of the leadership of the teacher unions who have described it as "childish". This seem to aggravate the situation because both the MoE and the GES seem not to call for an immediate amicable settlement of the impasse.

Another reason why this strike action must be taken serious is the unification of all the teacher to fight a common goal. Leadership of these unions are not ready to compromise this unity having realised that the gravity of a united teacher front embarking on a strike to drum home their demands would yield positive results. Again, leadership of the teacher unions who are usually accused by their members of being in bed with governments would want to prove otherwise to their members.

The Ministry of Education and the Ghana Education Service should find a soul soothing way of resolving the grievances of teachers. This industrial action should be depoliticized and approached it with the necessary professionalism and tact before it gets out of hand. If not, this strike action would not be called off any time soon.