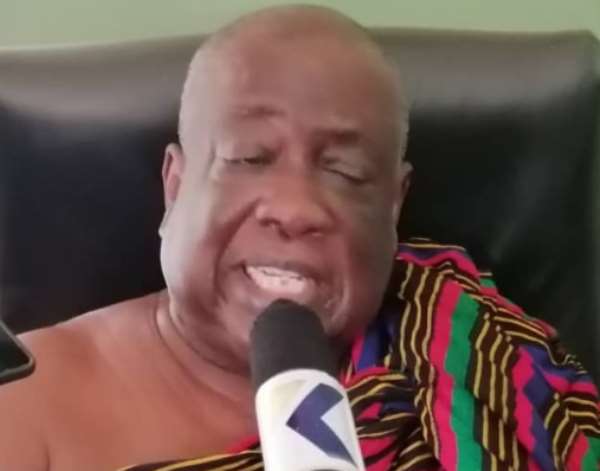 The Effiduase traditional council has called on President Akufo-Addo to as matter of urgency fire the Sekyere East District Chief Executive Madam Mary Boatemaa Marfo from office for describing her as a "liability' to them.

Nana Adu Ameyaw II the Chief of Effiduase has become a torn in our flesh and impeding the progress of the area.

"We have tried all means to settle it amicably but has proven futile. There is an impasse between our MP and the DCE, Nananom has done part of restoring peace but the DCE won't allow peace to prevail. Also, we all know the importance of school feeding. The ghost school feeding schools created by our DCE has brought Disgrace unto us and hardship unto our caterers. The caterers run to me on a daily basis with complaints of their huge debt as results of their debt not been paid due to the DCE ghost schools which the auditor general had interdicted her."

Below is the full story:
Sekyere East: "We Can't Work With Disrespectful DCE" - Asokore Traditional Council

The Asokore Traditional Council has spite fire on the embattled District Chief Executive of Sekyere East District Assembly in the Ashanti Region of Ghana.

The Asokore Traditional Council joined the calls for the dismissal of their District Chief Executive(DCE) Mad Mary Boatemaa Marfo from office at a conference today which was addressed by the Kontihene of the traditional Council Nana Osabarima Asare Ankumah Boama III.

The DCE was accused of not honouring invitation by the Omanhene of Asokore Traditional Council Nana Susubiribi S. K. B. Asante to settle the dispute between her and the Assembly members who wanted to Pass vote of No confidence in her, but it fell on deaf ears.

According to the Kontihene, the Omanhene and Traditional Council made several attempts to summoned the DCE to a meeting but she refused.

The failure to do so, according to the Chiefs amounts to disrespect and calling on the President to dismiss her from office.

"We can't work with someone who has failed to heed to calls by our Omanhene for her to come and sit down with us so we settle a dispute between the DCE, Assembly Members and Party executives, since we are all development partners. The dispute is hindering our development so we are very worried about these unfortunate development and wanted to solve it Amicably."

Also, the Nana Osabarima Asare Ankumah III said since the DCE has refused on several occasions to meet the traditional heads to solve the problem had disrespected them so the President must sack her.