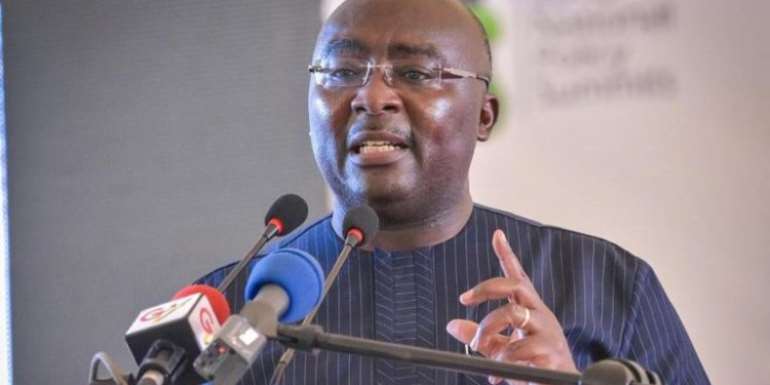 The government has highlighted the increase in budget allocations for all accountability institutions to enable them fight against corruption.

He said: “On the instructions of the President, the Ministry of Finance has increased budgetary allocations to all accountability institutions of the state including the Parliament of Ghana, the Judiciary, CHRAJ, EOCO, Office of the Attorney General, Ministry of Justice, the Auditor General, Office of the Special Prosecutor, and the Ghana Police Service.”

Dr Bawumia further noted that inadequate logistics and personnel of the country's security agencies are being addressed to ensure that corruption is effectively tackled.

The Commission for Human Rights and Administrative Justice (CHRAJ on Monday launched the Anti-Corruption and Transparency Week (ACT).

The ACT Week is a platform that seeks to create a national discussion to assess the implementation Ghana's anti-corruption policy, the National Anti-Corruption Action Plan (NACAP) and reinforce commitments by implementing partners for the years ahead.

The National Anti-Corruption Action Plan is geared towards helping to intensify the fight against corruption and the promotion of national development.

It contains strategic action plans identified and agreed upon by stakeholders, including the private sector, during nationwide consultations.

The ACT Week also seeks to reinforce the ever-pressing need of making corruption a high risk and a low gain venture in Ghana whilst creating the needed public awareness on the dangers of corrupt practices.

The different events will further advocate for sustained inter-agency collaboration and partnerships as well as the need to adequately resource anti-corruption agencies. CHRAJ chides Parliament over NACAP

The Commission on Human Rights and Administrative Justice (CHRAJ), has chastised Parliament , accusing it of failing in its oversight mandate in the implementation of the National Anti-Corruption Action Plan (NACAP).

According to Deputy Commissioner of CHRAJ, Richard Quayson, the House has not shown the needed muscle to ensure the smooth implementation of the plan to curb the canker of corruption.

Meanwhile, the National Democratic Congress (NDC) flagbearer, John Mahama, has asked the Akufo-Administration to stop making excuses when it comes to fighting corruption.

In a statement to mark today's [Monday] International Anti-Corruption Day, he gave assurance that the NDC will show more commitment in the corruption fight if it comes into government.

In Mr Mahama's view, “recent surveys are confirming that we [Ghana] are losing the fight against corruption.”