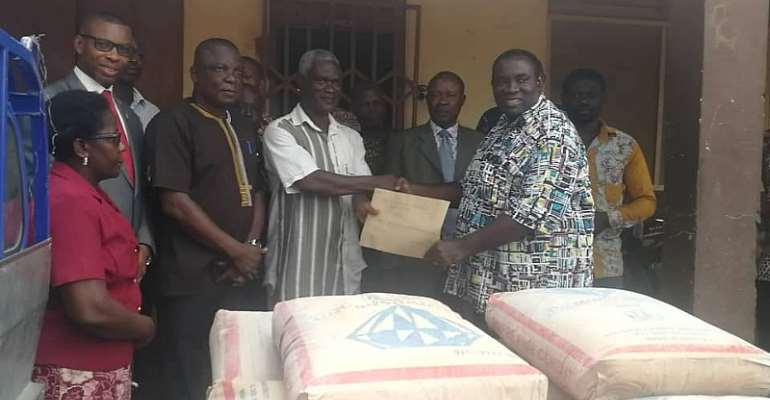 Chantan, Nii Okaiman and Israel Districts of the Church of Pentecost in the Kaneshie Area on Thursday, 5th December 2019, visited and donated 100 bags of cement worth GHC 3, 100.00 to the Abeka Motorway Basic School and Chantan M. A. Experimental Basic School which share a common compound as a cluster of schools.

The team was led by the Zonal Chairman, Ps. Benjamin Ampea-Badu (District Pastor, Chantan) who was ably supported by Pastors Emmanuel Kwasi Appiah and Samuel De-Graft Anto of Israel and Nii Okaiman Districts respectively as well as some officers of the church. Presenting the 100 bags of cement on behalf of the zone, Ps. Benjamin Ampea-Badu noted that the two schools’ shared compound has been the venue for most of the zone’s conventions, especially, Easter conventions and that it behooves the church as part of its social responsibility to support the school in their on-going building/ fencing project.

According to Pastor Ampea Badu, the Vison 2023 of the Church of Pentecost which aims at possessing the nations for Christ also encourages churches to provide support to society. He hoped that the donation will inure to the benefit of the two schools by improving upon their structures to promote learning.

On his part, Ps. Emmanuel Kwasi Appiah of Israel District added that the wellbeing of children is of great concern to the church and hopes this kind gesture goes a long way to affect the school positively.

The Assembly Member of Chantan, Hon. Abdul Fathah Sheriff could not hide his joy and expressed his utmost gratitude to the church.

Receiving the invoice and receipt for 100 bags of cement and the initial 20 bags of cement delivered, the Chairman of the School Management Committee who doubles as the P.T. A Chairman of Chantan M. A. Experimental Basic School, Mr. Stephen Yeboah thanked the church and reiterated how badly they needed the bags of cement, saying that it was indeed the right time that they had got them to give the two schools the necessary facelifts they deserve.