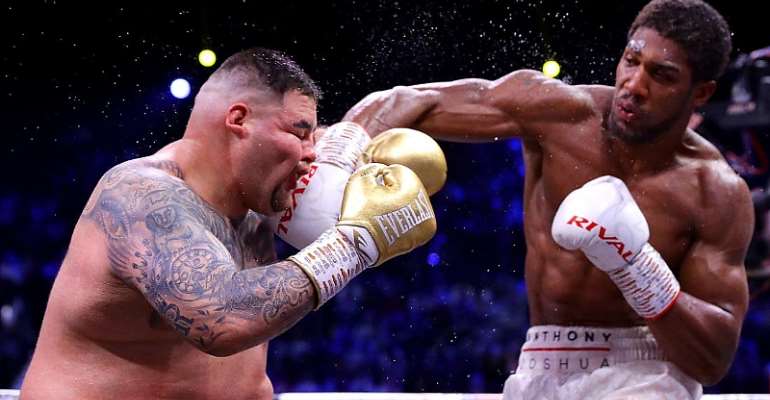 Andy Ruiz and Anthony in a bout

Did you watch the second boxing match between Andy Ruiz and Anthony Joshua?

The reason why I did not use the word fight is because people are mistakenly analyzing the whole match as though it was a fight. Some analysis I have read on the bout seems to be underrating the victory of Joshua. Let’s look at this again, Boxing is about technique, strategy and smartness.

Contrary to that popular assertion of people, I think Anthony Joshua needs to be given full commendation for regaining the world title.

Joshua entered the ring more focused and determined than I have ever seen him. Most importantly, he had a plan and was much disciplined in sticking to his plan.

Don’t be carried away

Joshua claimed the first round definitively with a hard and fast right hand that opened a cut over Ruiz’s left eye. This could have edged Joshua on and got him carried away. He could have been more aggressive from there and went in harder but he stayed to his plan and maintained his discipline.

You may get a leap with your plan and all may be working perfectly well. The tendency that you may be carried away and lose focus is high. But your victory is heavily dependent on your ability to maintain your focus and discipline.

You may have the best plan. Your plan may be working perfectly to the fullest but in all that never lose focus of the strength and capabilities on your opponent. It may be a good strength or a bad strength but either way it is still strength so don’t let the success of your plan lure you to underestimate your opponent.

Joshua kept winning round after round but he did not lose focus of the fact that Andy Ruiz has a powerful punch that can be very dangerous when released. Joshua knew his plan was working and there was the temptation for him to go for a knockout and that would have meant he going in close on Ruiz but that would have been very dangerous for Anthony Joshua especially knowing the capabilities of Ruiz.

Joshua sticked to his game plan. He needed a win and that was ultimately what mattered.

Joshua stayed smart as a visibly frustrated Ruiz begged him to trade on the inside of the ring in the 12th round. Clearly, Joshua was saying “is a boxing match, and not a fight”.

You don’t carry hatred into the ring. That can make you lose focus and discipline. Have a plan, prepare and go into the ring having full control of your emotions and plan. Hatred may cause you to fight and not to box.

Anthony Joshua was ripped off his World title in an unexpected and humiliating manner. Take a good look at Andy Ruiz- fat, unathletic, and does not even look like a boxer. It was a painful experience to be beaten by such a boxer and likely to cause Joshua to hate Andy Ruiz.

Joshua is known for knockouts and the thoughts of the humiliating defeat he suffered from Ruiz during the first bout alone should have pushed him to go all out for knockout to prove himself and redeem his image. But he respected his opponent and even after the fight he kept reinforcing the respect he has for Ruiz. It is only when you respect your opponent that you will be able to beat him.

“I was humble in defeat and I will remain humble in victory”- these were the words of Anthony Joshua after the fight. I am not too experienced in life, but one thing I have realized is that comfort breed contentment. The moment your mind deceives you to feel comfortable, that is the moment you stop developing.

Comfort does not breed success, hunger does. Be grateful for what you have but be hungry and work hard towards what you do not have. It is gratifying to be proud of what you have achieved but it is more adorable to stay humble with it.

Life is all about experience, there is no winning and no loosing.

You failed, yes it is an experience. You won, yes it is another experience. Gather all that and move on. Catalogue your success and be grateful for it. Enumerate your failures and accept them. Whether win or lose, learn and count them as experience.