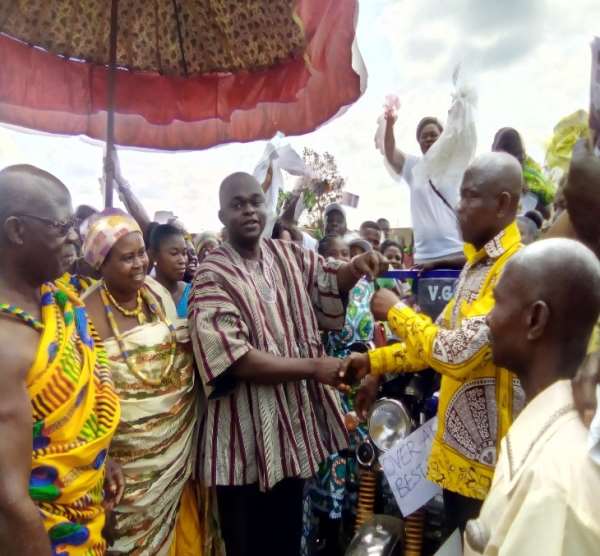 Some 13 deserving farmers including an elderly woman and a physically challenged, were on Friday December 6, 2019, awarded in different categories at the 35 th Farmers Day Celebrations in Wamfie, Dormaa East of the Bono Region.

He also commended government for the immense contribution to the Agriculture Sector especially the postings of Agriculture Extension Officers which has enhanced farming activities at the community level.

He called on farmers to work with the expertise and advices being offered them by the officers to maximise yield to improve the economy.

Speaking on the theme “Enhancing Small Scale Agriculture towards Agribusiness Development” the District Chief Executive of Dormaa East, Hon. Emmanuel Kofi Agyeman, emphasized that agriculture is a big-time business with a whole production chain and farmers everywhere as well as everyone must be encouraged to accept it as a business that has the capabilities to transforming lives through job creation and other creative ventures.

He explained that the time has come for Ghanaians to move away from the subsistence level of agriculture activities to a business level in order to break the grounds for better livelihood and prosperous economy as well as development.

He added that for people of his district to embrace this new wind of agri-business ideas, the assembly in collaboration with the District Agriculture Department is encouraging local farmers to form Farmer Base Organization for the purposes of training, motivation and consolidation for easy access to funds. The training would also be for staff and extension officers of the Department of Agric to ensure professionalism for better results.

Again, the DCE noted that the District Assembly has through the support of the Central Government established an Agriculture Mechanization Center, equipped with several tools, to enable the District start farm irrigation project which would encourage farming activities all year round. He encouraged that in order to effectively manage the machines, farmers should team up for its judicious use.

Hon. Kofi Agyeman reiterated that the use of the Agric Mechanization Center, as well as the active involvement of the District in government agriculture flagship programmes like planting and rearing animals for food and jobs, planting for export and rural development coupled with other initiatives such as eye-opening sensitization programmes for FBOs at the district level are means being adopted for agribusiness development.

The DCE stated that in the interest of the District and Mother Ghana, especially now that government is motivating the people to venture into agri-business development, there would be the need for everyone to be conscious of the dry season in order not to play carelessly with fire.

The DCE seize the opportunity to inaugurate the Agric Mechanization Center and an improvised ambulance for the Yaw Barimakrom Chip zone. The improvised ambulance is a motor tricycle covered with a tarpaulin and has one hospital bed and chair. The bed was purchased by the community while the tricycle by the assembly. The agric mechanization center also has two tractors, maize shriller, irrigation equipment and other important agriculture equipment. The occasion was also used to present start-up kits made of deep freezers, ice chest and stabilizers to 13 persons living with disability in the district and that add up to over 200 beneficiaries so far in the district.

August 4 declared public holiday in celebration of Founders ...
46 minutes ago