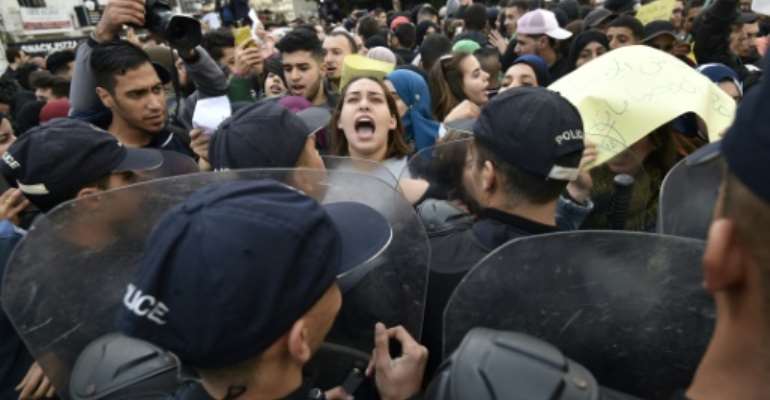 Some 200 people, mostly students, protested in central Algiers on Monday against a presidential election set for December 12. By RYAD KRAMDI (AFP)

At least ten people were arrested out of the some 200 demonstrators, mostly students and a few passers-by, who were protesting against Thursday's vote, chanting "no to the election".

Protester Abdelkrim, 22, said the students had gathered in the central Algiers University campus in support of a general strike that started on Sunday and came out into the streets when they saw pro-election supporters rallying unhindered.

"We wanted to express our rejection of the elections just as they expressed their opinions," he said.

Some 400 people had gathered Monday morning and demonstrated, undisturbed, in support of the widely opposed election in the same area in central Algiers used as a rallying point for anti-regime protests that started February 22.

For nine months, protesters have marched weekly to demand that Thursday's vote not entrench a political elite linked to longtime strongman Abdelaziz Bouteflika, who quit in April in the face of mass demonstrations.

Forced to clear the streets, the students gathered outside the university where they chanted anti-regime slogans.

Backers of the vote meanwhile chanted slogans such as "army and people are brothers", in support of the army which has assumed de facto power since Bouteflika's resignation.

They also chanted "no to foreign interference" in the upcoming polls.

Election supporter Ismael Barket told AFP he came from Chlef, 160 kilometres (100 miles) southwest of Algiers, to "ask everyone to vote on December 12 to bring (the country) out of this crisis".

"We are against foreign interference and with the military," the 59-year-old former serviceman said.

Several "spontaneous" rallies in favour of the election and regime have been held across the country, but they have pulled much smaller crowds than the anti-regime demonstrations.

Like every week since the start of the protests, students plan to march on Tuesday, two days before the presidential vote.