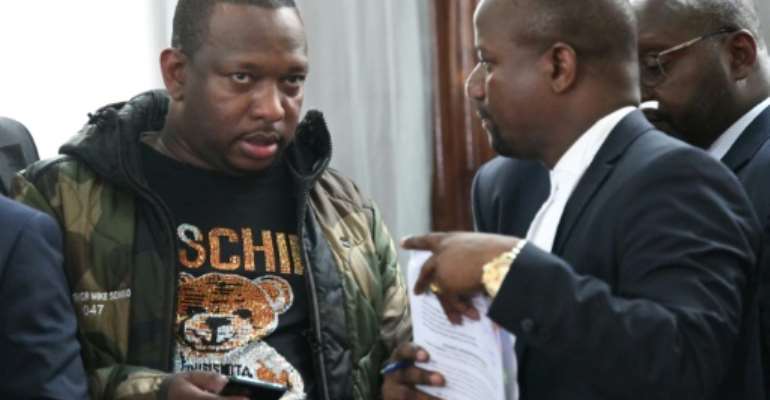 Nairobi Governor Mike Sonko, left, seen here in court in Nairobi on Monday, is known for his style mimicking an American rapper. By SIMON MAINA (AFP)

Nairobi's flamboyant governor pleaded not guilty Monday to more than 30 charges of money laundering, receiving bribes and conflict of interest in a court appearance held under tight security.

Governor Mike Sonko, the latest top official to be hauled in on corruption charges in Kenya, is accused of benefitting from irregular procurement and payments of $3.5 million (3.1 million euros).

He pleaded "not guilty" to all the charges when he was arraigned before anti-corruption court magistrate Douglas Ogoti, in a packed court secured by anti-riot police.

"You knowingly acquired property and money knowing it was the proceeds of crime," a state prosecutor said, reading out one of the charges, to which Sonko replied: "Not true."

State prosecutors also read out details from Sonko's bank accounts and several dates on which money was wired in from contractors who had won tenders in the city county.

Sonko spent the weekend in jail after his dramatic arrest in southern Voi saw him scuffle with police before being bundled in a helicopter and flown to Nairobi.

Ogoti ordered that Sonko be remanded in custody until Wednesday while the magistrate considered a request for bail.

Prosecutors urged against releasing Sonko, saying there was a high likelihood he would try to intimidate witnesses, an allegation rejected by the governor's lawyers.

Born Gidion Mike Mbuvi, the governor formally adopted the nickname "Sonko", which is Swahili slang for a rich and flamboyant person.

He has spent time in jail -- for failing to respect court dates -- and has fended off allegations of illegal activities including drug trafficking.

He is beloved by poor Kenyans for running his personally branded firetrucks and ambulances to assist people living in the slums.

Sonko is also known for his style mimicking an American rapper, dripping with expensive gold and diamond jewellery, and on occasion, golden shoes. He recently drew criticism for displaying his opulent dining room on social media.

President Uhuru Kenyatta -- like many presidents before him -- has vowed to combat corruption, a scourge that has beset Kenya for decades.

Dozens of top executives and government officials have been charged since Kenyatta's 2017 re-election, including sitting Finance Minister Henry Rotich who was charged in July over his alleged role in a multi-million dollar corruption scandal.