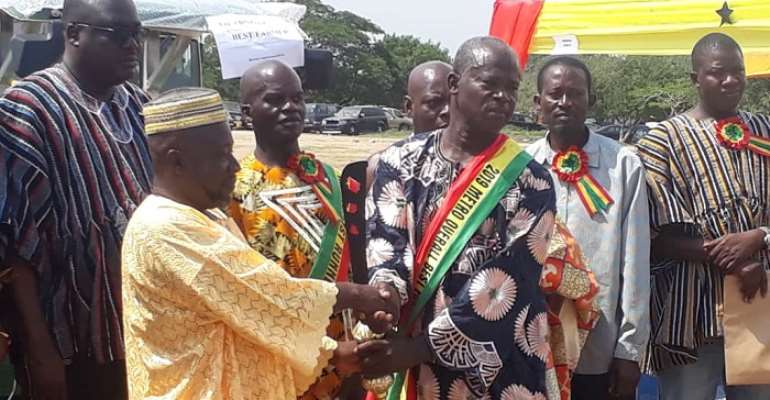 Tema Mayor presenting a certificate to the Overall Best Farmer

Tema Traditional Council has expressed displeasure over illegal and unregulated fishing by foreign trawlers in the country.

According to the council, the practice is decimating the country's fish populations and affecting the economy.

Nii Adjetey Agbo II, Mankralo of the Tema Traditional Council who poured out his anger during 35th Farmers' Day celebration in Tema, of the Greater Accra Region, feared the illegal activities especially by industrial trawlers, could deplete the country's fish stock.

He appealed to government to pay much attention to fishing activities in the area since fishing is far ahead of crop farming in the district.

Seven farmers and fishermen were awarded by the Tema Metropolitan Assembly for their outstanding contribution to agriculture in the metropolis.

The seven farmers made up of best livestock farmers, best crop farmers, best fisher farmers and best extension officer, were given certificates, household items, farming implements among others.

He is into the cultivation of maize, cassava, sugarcane, pepper, onion, okro, plantain, among others. He also rears livestock such as sheep, local birds, snails, crabs, guinea fowl, etc.

Also, he stated that 1,072 farmers had benefited from 4,500 bags of NPK and Urea fertilizers with other interventions rolled out through Adepa, E-master and Agoo to the infestation of the fall army worm in the metropolis.