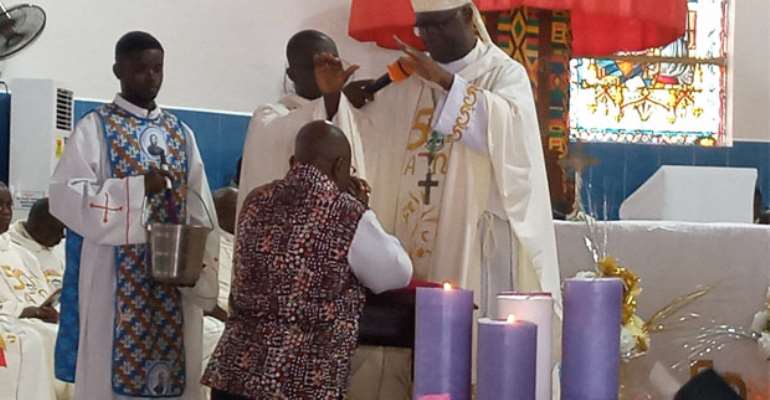 The President being prayed for by Most Rev. Bonaventure Kwofie

President Akufo-Addo was the toast of the members of the Star of the Sea Catholic Church in Takoradi yesterday when he, after taking the podium, quoted some Bible verses to back his decision to implement certain pro-poor policies by his government.

The President was the guest of honour at the climax of the Golden Jubilee celebration of the Catholic Archdiocese of Sekondi-Takoradi.

He started by quoting from Philippians 4:13 and said “I can do all things through Christ who strengthens me.”

He then interpreted the quotation as “through Christ who strengthens me and my government, all the programmes and policies being rolled out would be implemented to the benefit of all Ghanaians,” attracting spontaneous applauds from the congregation.

According to him, some of the policies being implemented by his government were once described by his opponents as overly ambitious and not feasible but said “by the grace of God, we are doing it one by one.”

He mentioned the Free Senior High School policy which he said had let to an unprecedented increment in secondary school enrolment.

“The Planting for Food and Jobs, One District, One Factory, One Village, One Dam, and the development of our rail and road infrastructure, amongst others, will be implemented to the benefit of the people,” the President said.

He continued “I took a solemn oath to serve our nation and to improve the living standards of the Ghanaian people. I shall, with God's guidance, continue to do my best to live up to my oath of office.

“We can only do so through hard work and a determination to fight corruption in our public life. That is the path that will lead us to the national transformation we desire, and that is the path my government has been treading since we assumed office.”

Towards the achievement of the goal, the President asked for the support of the church and all other religious people.

He praised the Catholic Church for the numerous contributions it had made to support successive governments, especially in the areas of health and education, and urged the church to do even more for God and the country.

He told the Catholic Church that the Lord had not forgotten their various contributions towards the country's development and improving the living standards of the people, and that God would reward the church.

The President quoting from Hebrews 6:10 said, “For God is not unjust and He will not forget your work.”

“Please pray to God to grant me sound health, wisdom, courage, strength and a good heart so that I will be able to work assiduously to turn the fortunes of this country around so as to expedite the transformational process of this country,” he stressed.

The President eulogized the Archbishop of Accra and the Apostolic Administrator of the Diocese of Sekondi-Takoradi, His Grace, the Most Rev. John Bonaventure Kwofie, describing him as a man of dignity and a hard-working person.

Preaching the homily, the Archbishop of Accra, Most Rev. Kwofie, warned Ghanaians against corruption and other practices that impede the country's growth, saying “all of us need to repent and change from our old deeds if we want to see our country move forward in the right direction.”

Most Rev. Kwofie later prayed for the President after presenting a wooden cross with the crucified Christ carved on it. The President in turn presented cash of GH¢20, 000 to support the church's Jubilee Anniversary celebration.