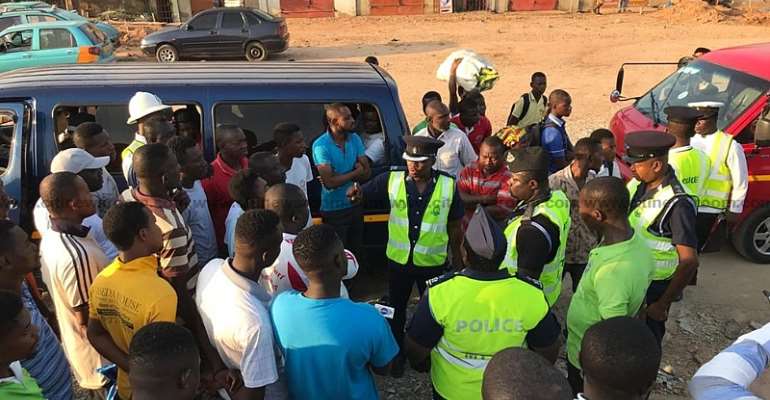 The War Against Indiscipline team on Monday morning made a stop at the Amasaman Ghana Private Road Transport Union (GPRTU) station to sensitise and warn commercial plus tipper truck drivers of the dangers of indisciplined driving.

25 commercial drivers who were arrested on the Pokuase Highway for using the wrong side of the road have been spared after receiving public education and a stern warning from the Police.

The stretch is known for its notorious traffic jams due to increased traffic volumes, usually worsened by driver indiscipline.

Construction is, however, ongoing to widen the highway.

But the undisciplined drivers who took to unapproved routes hoping to cut in ahead – a practice that endangers pedestrians and other motorists were arrested for some 45 minutes before the police granted them mercy.

Citi TV's War Against Indiscipline returned on Ghana's roads last week after The Chief Executive Officer of Citi FM and Citi TV, Samuel Attah-Mensah, disclosed that the reason the exercise stalled was that the police bowed to pressure from unseen hands.

The War Against Indiscipline was started in May 2019 and in June the station roped in police to name, shame and punish persons who break road traffic regulations.

The campaign is intended to run until May 2020. As at July 2019, Citi TV's collaboration with the police to clamp down on errant drivers has accrued to the state over GH¢258,000.

The amount was realized from 499 drivers who were arrested for breaching traffic regulations on various roads in Accra.