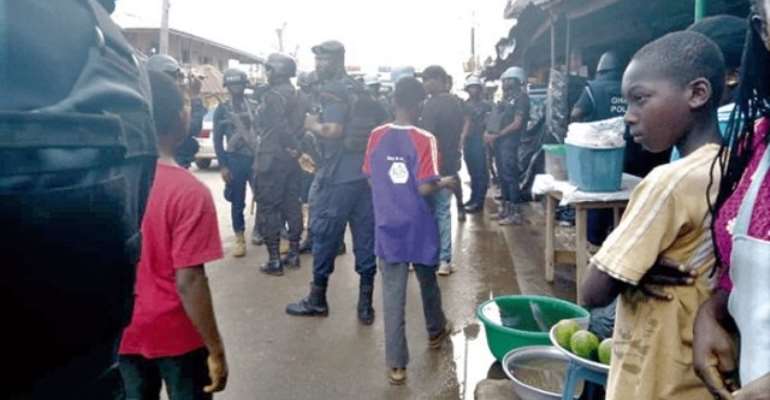 Police presence in Mankessim during the 'outdooring' ceremony

The police have picked up five persons in connection with the shooting during the ‘outdooring’ of a Paramount Queenmother, Nana Araba Otua II, in Mankessim in the Central Region last Saturday.

According to the Mankessim Divisional Police Commander, Deputy Commissioner of Police (DCOP) Owoahene Acheampong, the five, whose names have been withheld, were assisting in investigations.

What was supposed to be the ‘outdooring’ of a queenmother turned bloody when two persons, including an officer of the Bureau of National Investigations (BNI) and a civilian, were shot dead by unknown assailants during the procession, with Nana Otua riding in a palanquin.

The Mfantseman Director of the BNI, Mr Samuel Ampofo, and another person yet to be identified died from gunshot wounds shortly after arriving at hospital.

Seven other people, including a Police Inspector, William Nyarko, also sustained varying degrees of injury. Inspector Nyarko was referred to the Cape Coast Teaching Hospital for treatment, while the others were referred to the Our Lady of Mercy Hospital in Mankessim.

They included Kwesi Owusu, 65; Frederic Amoanoo Dadzie, 37; Nana Boako, 29; Benedick Nana Banco, 29, and one other not identified but aged about 27.

Also on admission at the Our Lady of Mercy Hospital is one Nana Oboso, accused and attacked by the processors for orchestrating the firing of the gunshots.

The ‘outdooring’ of Nana Araba Otua came after years of a chieftaincy dispute in the area. The Daily Graphic gathered that a court ruling last week allegedly struck out the gazette of Osagyefo Amanfo Edu and Nana Ama Amissah who had, for years, been recognised as the Paramount Chief and the Paramount Queenmother of Mankessim, respectively.

Nana Otua's faction, which had laid claim to the stool for many years, consequently held the ‘outdooring’ ceremony, which began from the palace at Obuonmu in Mankessim to the five main family shrines.

Dozens of people, clad in white, with white bands and in a jubilant mood, followed the queenmother, who was in a palanquin, during the procession.

But when the procession was barely a few metres from the palace, unknown assailants fired gunshots into the procession, hitting the deceased persons and the others.

The incident compelled the Mankessim Police to call for reinforcement from the Cape Coast Regional Police Command.

There was palpable tension in the town after the shooting, as people formed groups to discuss the incident, while vehicles full of policemen criss-crossed the town.

After about two hours of a hold-up, the processors gathered again and went through the streets of Mankessim and re-converged on the palace grounds, amidst jubilation.

Some of the spectators said the procession was the last ritual to confirm Nana Otua as the Queenmother, and that they were glad the process had finally gone through.

The Linguist, Omankyeame Kofi Hagan, in a brief remark, said Mankessim was now ready to move on, with its Queenmother ‘outdoored’.

Soon, he said, in consultation with the kingmakers, a new paramount chief would be named, enstooled and ‘outdoored’.