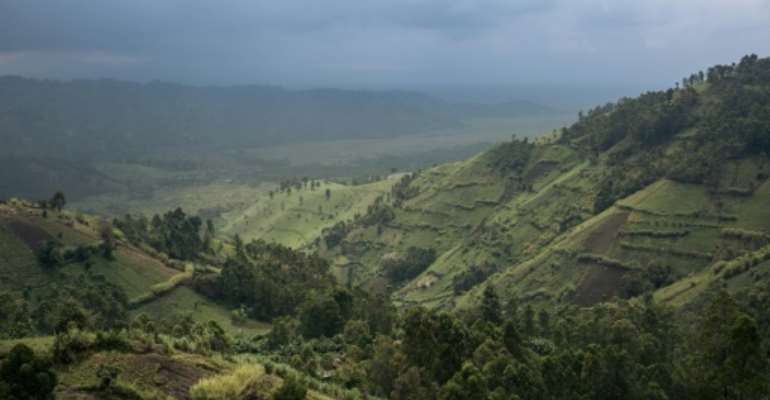 Crops border Virunga National Park in DR Congo, where the goverment faces a daunting challenge to protect the rainforest. By ALEXIS HUGUET (AFP)

Lush rainforest covers millions of hectares of the Democratic Republic of Congo, a central part of Earth's natural defence against global warming -- but it is under severe threat from a perfect storm of mismanagement and corruption.

An array of global and local NGOs are in a tense fight to save the rainforest, which lost an area twice the size of Luxembourg last year alone, according to Global Forest Watch.

But the problems run right through DR Congo society -- from the poor who rely on charcoal for fuel in a country with meagre supplies of other power, to the senior officials who profit from illegal logging.

"There are lawmakers and soldiers involved. They don't pay taxes -- it's unfair competition," says Felicien Liofo, head of a wood craftsmen's association.

Local police say soldiers simply rip apart the fences around the forest and threaten to shoot anyone who tries to stop them.

The government faces a daunting challenge to protect the rainforest.

Its 2002 forestry code imposed a moratorium on new concessions and regulated the number of trees that could be chopped down under existing permits, but officials complain of a lack of resources. 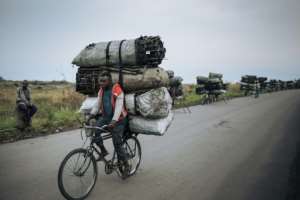 Many people in impoverished DR Congo rely on charcoal as their main fuel, which comes as a steep price for the environment. By ALEXIS HUGUET (AFP)

Felicien Malu, a provincial environment coordinator, has roughly 1,200 workers to cover a province twice the size of Portugal.

But his staff, he says, are not paid and lack even the basic tools of their trade -- boats, motorcycles or pickup trucks.

"We can't organise control missions because there are many rivers to cross and unpaved roads," he says.

His predecessor in the job was suspended for embezzlement, underlining how corruption feeds the problem of deforestation.

NGOs have launched a multi-pronged attack against the plunder.

Greenpeace Africa and a coalition of eight NGOs from DRC and neighbouring Congo-Brazzaville have demanded a halt to all industrial activities in the millions of hectares of peatland shared by the two countries.

The ancient wetlands store huge amounts of carbon, but companies are involved in oil exploration, logging and industrial agriculture in the area. 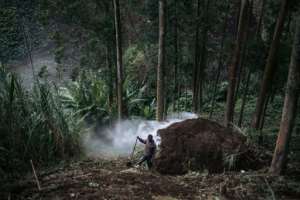 The WWF is among groups trying to minimise the impact of charcoal burning by introducing more efficient ovens. By ALEXIS HUGUET (AFP)

Global Witness investigated the illegal logging trade and earlier this year accused a general in the Congolese army of illegally reselling logging permits.

However, DRC remains impoverished and electricity is a rare luxury, meaning that most Congolese still rely on charcoal as their main fuel supply.

Making charcoal involves chopping down trees and slow-burning the wood in covered ovens -- all of which comes at a steep price for the environment.

"I get through a $30 sackful every two months. That's a fair chunk of what I earn," says Solange Sekera while shopping at a market in the eastern city of Goma. "We have no other means of preparing meals."

Our forests may disappear'

The trade in charcoal -- known locally as makala -- is worth millions of dollars and it is attracting armed groups to the Goma area, threatening Virunga natural park, a sanctuary for endangered mountain gorillas. 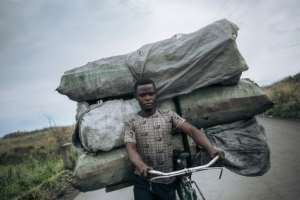 The trade in charcoal is worth millions of dollars and is attracting armed groups to the Goma area, threatening Virunga natural park, a sanctuary for endangered mountain gorillas. By ALEXIS HUGUET (AFP)

More than 2,000 kilometres (1,200 miles) to the west, the reliance on charcoal in Kinshasa is also causing severe problems.

Kinshasa residents consume five million tonnes of wood a year, according to French research group Cirad, and increasing urbanisation is just raising the pressure on the forests.

On the hillsides around the capital, there are scarcely any trees left.

NGOs and the government are once again trying to respond.

The World Wide Fund for Nature (WWF) is trying to minimise the impact of charcoal burning by introducing "eco makala" ovens that burn the fuel more efficiently and so use less wood.

And President Felix Tshisekedi is trying to boost electricity across the country to reduce demand for wood-based fuel.

He has championed hydroelectric power -- and ground was broken in early October on a new dam in Goma.

NGOs and locals are not convinced of the viability of the project, but Tshisekedi is adamant: "Given the current rate of population growth and our energy needs, our forests may disappear by the year 2100," he says.