Algerian army sees vote as route back to shadows: analysts 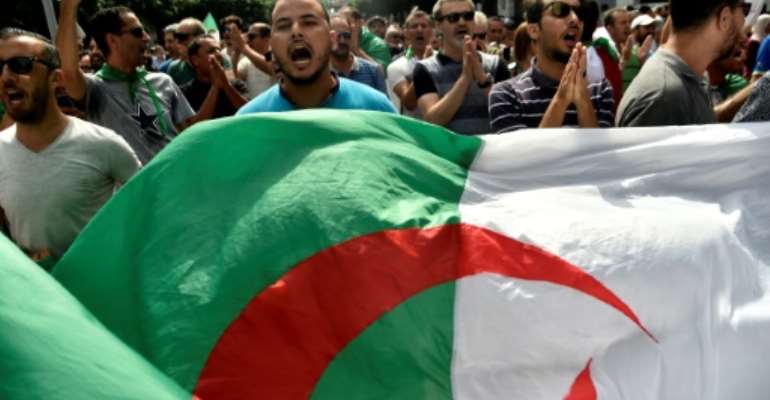 Algeria's army, the heart of an opaque regime, exercised power from the shadows until it was thrust into the limelight with mass protests and the April departure of president Abdelaziz Bouteflika.

Eight months later, commanders are hoping to use Thursday's contentious presidential vote to create a "civilian facade" and return to pulling the strings backstage, analysts say.

The "Hirak" movement of massive street rallies that brought an end to veteran Bouteflika's two decades in power had an unintended effect.

"The military high command found itself, against its will, in centre stage," said Moussaab Hammoudi, a PhD candidate at the School for Advanced Studies in the Social Sciences (EHESS) in Paris.

"That put it in a very uncomfortable position, because it prefers to stay hidden."

"Even though officially he's just the deputy defence minister, he's emerged as the true master of the country," said Jean-Pierre Filiu, a professor at Sciences Po university in Paris who has written a book on the Hirak.

"The army has always been at the heart of the Algerian system."

Bouteflika resigned on April 2 after weeks of street demonstrations and calls from Gaid Salah for his impeachment.

But while the army was key to his downfall, Bouteflika's departure brought the military into direct confrontation with the Hirak and its demands for more sweeping reforms.

While Gaid Salah has championed the holding of a presidential vote on December 12, the protest movement rejects any vote as invalid until root-and-branch reforms are passed and regime figures ousted.

Indeed, their changing slogans have echoed changing perceptions of the army's role as protesters invoke fears of a military state.

The early cries of "the army and the people are brothers!" have been replaced with "put the generals in the trash" and even "Gaid Salah is a traitor!"

Since Algeria's hard-won independence from France in 1962, the army has operated as "a state within a state", wielding discreet but vast political influence, said Kamal Cheklat, Maghreb specialist at the Centre for Sociological and Political Research in Paris (Cresppa).

"The Hirak wants to question all that," he said. That would represent "a real break in the order of things established by the Algerian military a long time ago."

But meeting the protesters' demands is not on the army's agenda, he added, noting that the military establishment has attempted to force through a vote opposed by "the majority of Algerians".

That constitutes a bid to create "a civilian facade to its rule and pass on... the political, economic and social crisis to the future president," Cheklat said.

Filiu said the army "is sincerely hoping to restore the status quo and smother the Hirak by imposing the reinstatement of a front-line civilian presidency".

While Algeria's army was key to Bouteflika's downfall his departure brought the military in direct confrontation with the Hirak protest movement. By RYAD KRAMDI (AFP/File)

For Flavien Bourrat of France's Institute for Strategic Research at the Military School (IRSEM), the army's refusal to grant concessions to the protest movement is a bid to stop Algeria's political transition escaping its control.

Many in Algeria still harbour dark memories of the "failed democratic transition" in the early 1990s, when the army's cancellation of elections expected to be won by Islamists sparked a decade-long civil war.

"The military hierarchy doesn't want to get (directly) involved in politics," Bourrat said.

He recalled the army's repression of protests in the late 1980s and then its role during the civil war, which seriously damaged its image.

"Algeria's economic situation is extremely difficult and worrying and few people want to end up in charge of that file," he said. "Certainly not the military."

But, Hammoudi warned, the future president "will have no power over major issues. He will receive injunctions (from the army), sometimes implicit -- as has always been the case."