NIA’s Policy Approach To National Database Is The Greatest Scam 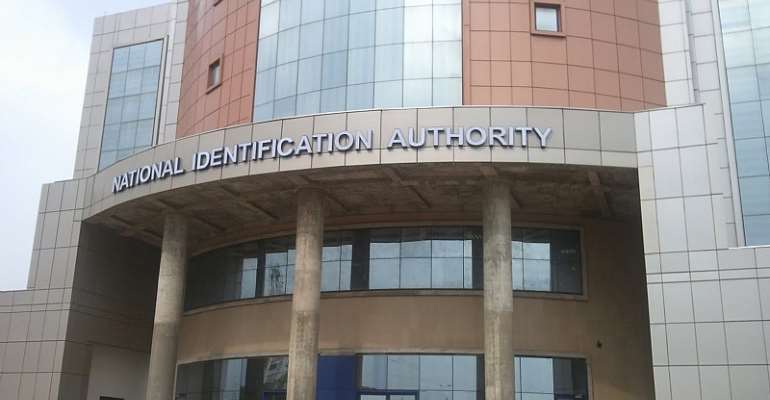 Following from available evidence, it is the position of STRANEK-Africa that regardless of the political and financial commitment by the government of Ghana towards the establishment of an extensive, reliable, robust and all-encompassing national identification scheme through the National identification Authority, if provisions are not made for capturing and registering at birth, all Ghanaians and resident foreigners born in Ghana as well, the ongoing National Identification Registration would be an exercise in futility and a wastage of precious but limited public resources.

It is undeniable that an extensive, reliable, robust and all-encompassing national identification scheme for Ghana would enhance the development and formalization of the Ghanaian Economy, improve e-governance, identification of resident foreigners as well as improving the reliability and traceability of the identities of the bearers of the Ghana Card which is an important network in crime control, policy making and effective policing in the country.

Ghana’s attempt at establishing a National identification Scheme dates back to 1973 when Ghanaians on the border regions of Ghana namely Volta, Northern, Upper East and Upper West, Brong-Ahafo, and parts of the Western Region were issued National Identification Cards.

Fast forward, foreseeing the relevance of a national identification infrastructure to the development of Ghana, the then Provincial National Defence Council (PNDC) through the National Commission for Democracy (NCD) endeavoured to resurrect and continue Ghana’s 1973 national identification project but their dream was shot down due to economic and financial challenges. Also, very critical to Ghana’s current National Identification Scheme is the 2001 National Economic Dialogue held in Accra between 14th -15th May 2001 which prioritised the Ghana National Identification System (NIS) as a major policy concern.

Following this, the National Identification Authority was established through an Act of Parliament, the NIA Act, 2006 (Act 707) which gave the NIA the necessary legal backing on which to operate. To fulfil their mandate of collecting, processing, storing, retrieving, disseminating personal data of Ghanaians both resident and non-resident, legally and

Even though several institutional attempts and reforms have been made by successive government to establish a National Identification System for Ghana, the focus has largely been on already born and living Ghanaians both in Ghana and abroad and foreign legal or permanent residents in Ghana with little or no attempt made at establishing an integrated system that captures at birth and allocate permanent identity numbers to Ghanaians and resident foreign nationals born in Ghana. Where such an attempt has been made, it has been nothing more than rhetoric.

Following from the above, it is the position of STRANEK-Africa that regardless of the political and financial commitment by the government of Ghana towards the establishment of an extensive, reliable, robust and all-encompassing national identification scheme through the National identification Authority, if provisions are not made for capturing and registering at

birth all Ghanaians and resident foreigners born in Ghana as well, the ongoing National Identification Registration would be an exercise in futility and a wastage of precious but limited public resources.

This policy document focuses on identifying the weaknesses in the approach adopted by the NIA, highlights some best practices globally and recommend possible ways of mitigating the foreseeable and recurring financial burden on the Ghanaian taxpayer and our limited resources.

To ensure that their National Identification System do not suffer any setbacks as well as double financial jeopardy, when a child is born in Scandinavia (Sweden, Denmark, Finland etc.), the hospital reports the birth to the respective Scandinavian Tax Administration/National Population Register. These Tax Administrations then assigns the child a National identification

number and sends a request or notification to the parents (Father and Mother) to choose a name for the child.

The notification shall state who the father of the child is, or state who the mother has named as the father of the child in the event that paternity has not yet been established. In cases where paternity has not yet been established or where the parents are not cohabiting, the notification of birth shall be sent both to the National Population Register and to the maintenance enforcement agency (makes decisions on child maintenance if the parents do not make a private agreement).

sends a birth certificate to the child’s parents in the mail. However, in the event that a child is born without a doctor or midwife in attendance, the mother herself or parents must notify the Tax Administration/National Population Register of the birth. More so, when a child is born whiles the parent is temporarily staying abroad, she shall notify the respective Tax Administration within one month of the child’s arrival in Scandinavia. This is because a child acquires his/her Scandinavian citizenship by birth if one of the parents is a Scandinavian citizen at the time of the birth and subject to the national laws of the country of the opposite partner especially when the child is born abroad. Notification shall also be given when the child is stillborn. Following from the above, it is clear that the Scandinavian National Identification System focuses on capturing and assigning to every child born in Scandinavian or to Scandinavian parent(s) a National identification Number at birth. Not only have they harnessed the benefit of an integrated national identification Scheme, but they have also used child and parental benefits as incentives to get children born in and outside Scandinavian registered into their respective National Registers.

To establish a comprehensive and reliable National Identification Scheme (Database), it is not prudent to place the legal burden and consequences solely on the parent(s). Even though Births and Deaths Registration Requirements and Procedures in Ghana requires parents to register their newly born babies not later than 12 months in the district where the birth occurred, STRANEK-Africa recommends that the Government of Ghana through the Ministry of Health and the National Identification Authority introduce an incentive scheme to get parents register

the birth of their children, particularly those whose childbirth occurred outside the hospital, in the absence of a registered doctor or midwife or an unregistered healthcare facility or at home, children born to young mothers (between 15–19 years), children whose mothers have no formal

education, mothers who reside in rural areas and mothers in the poorest wealth quintile. This is because of evidence from Dake and Fuseini’s (2018) study titled Registered or unregistered?

Levels and differentials in registration and certification of births in Ghana established that “home births and births that were not assisted by a medical professional were observed to have the lowest proportion of registered and certified births”. This incentive package can be in the form of a lump sum that parents receive at birth or child support for the first two years. This will in no doubt encourage parent(s) to register their newly born babies to the nearest hospital or to the Birth and Death Registry in the respective districts they gave birth. By so doing, the NIA will secure and capture the data of all newly born babies in Ghana. In other words, the NIA will succeed in securing the very primary medium through which new ones join the Ghanaian Society.

However, in cases where paternity is or has not been determined, the Department of Children under the Ministry of Gender, Children and Social Protection should collaborate with the Ministry of Health and Ghana Police Service to step in to conduct the needed DNA Test to establish the paternity of the child. Not only is the paternity of the child needed to establish his/her nationality at birth, but also because Article 7 of the United Nations Convention on the Rights of the Child signed on 20th November 1989 (which came into force on 2nd September 1990) and which Ghana is a signatory to, states that every child has the right to be “registered immediately after birth and shall have the right from birth to a name, the right to acquire a nationality and as far as possible, the right to know and be cared for by his or her parents”.

In the case of hospitals and clinics across the country, STRANEK-Africa recommends placing same but strict responsibility on hospitals and clinics where childbirth occurs. These institutions must be required by law to report every childbirth to the Birth and Death Registry or the NIA in their respective districts through an integrated registered portal. Failure to do so

should also attract the needed sanctions and penalty. This is very critical to establishing, strengthening and maintaining Ghana’s National Identification Scheme (Database) as well as whipping in line the very institutions that matter when it comes to the primary medium through which new ones join the Ghanaian Society.

The Double Financial Jeopardy
Considering the questionable cost of the NIA project ($1.22billion) over a fifteen-year period, one would only expect NIA to first secure the very medium through which new ones join the Ghanaian Society. However, the reverse was done.

STRANEK-Africa has combed through all the publications, policy documents and strategies of NIA since January 2018 but have found nothing (no actionable policies and steps) taken by the NIA to register newly born Ghanaians whiles embarking on their poorly thought approach of registering first, already living and existing Ghanaians. To our shock, the NIA on 27th April 2018 in a press conference read by its Executive Secretary (Ken Ateffuah) announced the national mass registration of eligible Ghanaians for the Ghana Card starting with the Greater Accra Region between Monday, 29th April, and Saturday, 6th July 2019, Volta and Oti regions from July 15 to August 1; Northern, Savannah and North East Regions - August 13th to September 2nd, Upper East and Upper West Regions from September 12 to 29, Bono, Bono East and Ahafo- October 10th–30th, Western Region and Western North - November 11th to December 2th, the Ashanti Region from December 10th to January 31st, 2020, Eastern Region from February 12th- March 4th and Central Region from March 13th-31th 2020.

In conclusion, it is the position of STRANEK-Africa that if the object is to build a comprehensive and secured National Database, why not focus on establishing and extending to all registered health centres, all districts offices of the Birth and Death Registry the needed infrastructure to securing and registering new-births (the very primary medium through which new ones join the Ghanaian Society)?

Considering the amount of Taxpayers money expended on the NIA’s National Identity Register Project and the approach adopted by the Kenneth Attafuah led NIA, STRANEK-Africa will not mince words and therefore, with all certainty describes and pronounces the approach

adopted by the NIA as the greatest Scam and disservice in the history of Ghana if they do not change their course of direction. This is because the focus of NIA’s Ghana National Card registration and National Register (database) seek to achieve a certain political goal in the short run other than establishing a comprehensive national identification scheme for Ghana today and beyond.

Recommendations for Strengthening the National Database

students without a National Identification Number and or a Birth Certificate. Following this, the NIA and the Birth and Death Registry at the district level will take the needed steps to register the persons and the needed action taken to charge the parents (Guardian) if the children are below 18 years. A typical example is in Australia where birth certificates are usually required for a variety of purposes including school enrolment, drivers licence, employment and Government benefits and entitlements.

2. Incentivising the Schools: Developing an incentive scheme aimed at rewarding schools for their effort and the number of people registered through them.

3. Strengthening and demanding by law the responsibility of health facilities in Ghana at reporting every childbirth to the Birth and Death Registry or the NIA in their respective districts. Failure to do must be subject to a fine.