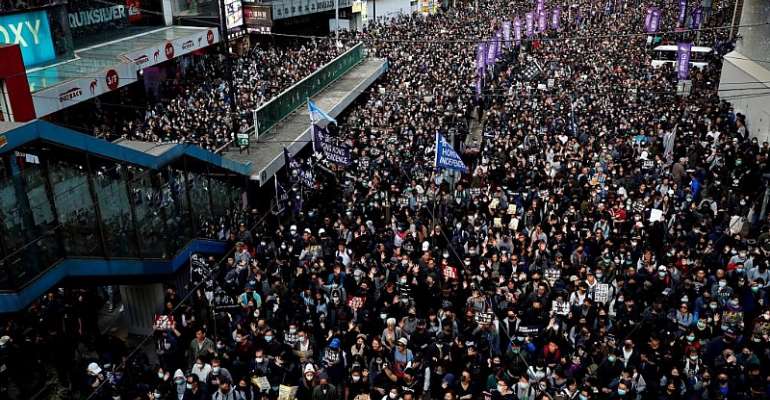 Some 800,000 protesters took part in the largest mass rally through Hong Kong on Sunday to mark the pro-democracy movement's six month anniversary, with leading activists warning the city's pro-Beijing leaders that they have a last chance to end the current political crisis.

Pro-democracy protesters took part on Sunday in what has been the largest mass demonstration on the streets of Hong Kong in months to show their support for the movement.

People snaked for hours through the financial hub's main island as the protests marked six months.

Eric Lai, from the Civil Human Rights Front, CHRF, told reporters Sunday evening that 800,000 participants came out in support of the movement.

The CHRF, which advocates non-violence, has been the main umbrella group behind record-breaking rallies earlier in the summer.

But figures from the city's police force, which often gives lower numbers, told local media that 183,000 protesters were present; still one of their highest estimates in months.

Instead, the pro-democracy camp, with the support of non-government groups, came out of the elections with more bargaining power.

Protesters' demands
What started out as a protest against a proposed extradition bill with Beijing, spiraled into a push for Hong Kong to maintain its distance from mainland China.

Demands by protesters have yet to be directly addressed.

Organisers have called on Carrie Lam, the current Chief Executive of Hong Kong to address the following grievances:

Organisers have called on Lam to meet their demands, with CHRF leader, Jimmy Sham stressing on Friday “this is the last chance given by the people to Carrie Lam.”

"No matter how we express our views, through peacefully marching, through civilised elections, the government won't listen," said Wong, a 50-year-old protester, who attended Sunday' rally.

"It only follows orders from the Chinese Communist Party," he added.

Authorized protest
Since demonstrators took to the streets six months ago, the semi-autonomous city has been hit by increasingly violent protests.

But since the 24 November election, there has been a marked drop in violence and vandalism.

For that reason, police took the rare step of allowing the CHRF to organize Sunday's march; making it the first time the group has been granted permission since mid-August, but with conditions.

They did warn that there would be zero tolerance for violence by radicals.

Anti-LGBTQI+bill not to engender hatred for persons, meant t...
46 minutes ago

JB’s two phones tendered in as evidence
46 minutes ago