French strikes: heading for a repeat of 1995 nationwide shutdown? 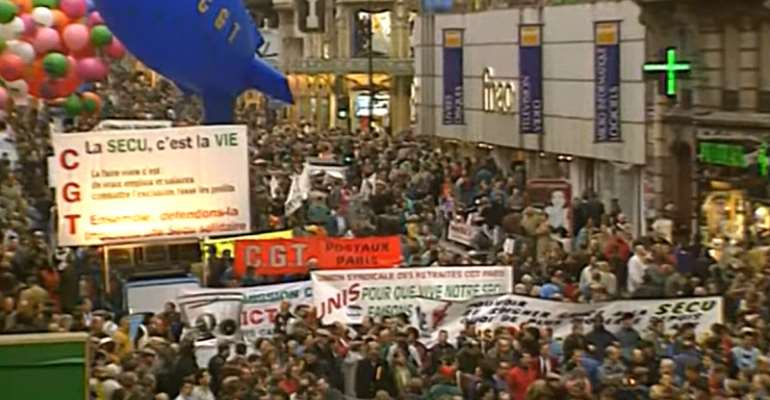 French unions behind the December strikes hope that their action will pressure the government into backing down from its attempts to overhaul the pension system – just like they did in 1995. The circumstances 24 years on are remarkably similar. But how much has the context changed?

In 1995, after three weeks of nationwide strikes and a complete paralysis of the public transport network, the unions forced then prime minister Alain Juppé to abandon his plans to change what is known as the special retirement scheme, which provided benefits for those working in sectors such as railways.

The protesters in December 2019 are pushing for similarly dramatic end to President Emmanuel Macron's intention to overhaul the entire pension system and replace it with a single, points-based scheme.

After bringing nearly a million people into the streets on 5 December, the unions are well on the way to increasing the pressure, with yet another demonstration planned for Tuesday.

"In 1995, at the first strike, Alain ­Juppé announced he would never budge on his project, but things evolve quickly. And the anger is growing. The government should be careful," Philippe Martinez, leader of the hardline CGT union told the Journal du Dimanche.

'Attack' on French social model
At the time, the government's desire to cancel the "special retirement scheme" was coupled with a vast reform of the social security system.

"This time, it's the whole French retirement system that the government wants to overhaul and replace it with a universal system," explains political commentator Bruno Cautrès interviewed by the Le Parisien daily.

"Each time, it's an attack on a social model which the French hold dear. And all of this within a context of general dissatisfaction and extremely strong social anxiety," he says.

Campaign promise
President Macron has never hidden his ambition to modify the pension system. In fact, it was one of his key 2017 campaign promises, which, after his election, he quickly put into motion with the nomination of Jean-Paul Delevoye to lead the pension reform project.

He has already angered unions by suggesting cancelling the more advantageous pensions enjoyed by some professions including public transport and utilities workers, sailors, notaries and even Paris Opera workers.

Political observers are suggesting that if Macron backs down now, he will ruin his chances to run for a second mandate in the next elections in 2022.

Although numbers have stayed relatively stable over the last 24 years, unions today find themselves in so many different conflicts, which weakens their ability to fight on all fronts.

Transport habits have changed
In 1995, alternatives to public transport were limited. Some turned to the trusty bicycle, but at that time in the land of the Tour de France, there were only 4.3 kilometres of cycle paths in Paris – nearly 200 percent less than today. And the Paris town hall is planning to expand the cycle path network to reach 1,000 kilometres by 2020, compared to 700 in 2014.

No metros or RER train lines were allowed to run back during the 1995 strike. But today, despite a massive number of workers on strikes, the lines 1 and 14 in Paris can still operate because they are automatic and don't need a driver.

Despite rules in place demanding a minimum service clause for public transport, the limited number of trains running at peak hour during strikes is hardly enough to satisfy the hundreds of thousands of commuters who use the networks each day.

The transport companies have now issued calls for customers to turn to carpooling services, many of which can be found on phone apps, or use the motorised scooters which can be hired in major cities.

"Things might have changed a lot in the big cities," warns Bruno Cautrès, "but it's not the same for the rest of France. There aren't Velibs (hire bikes) or scooters everywhere."

Ahead of the next nationwide protests, pensions commissioner Delevoye is on Monday set to unveil the outcome of his months-long consultations. Prime Minister Edouard Philippe will announce final details of his proposed reform plan on Wednesday, a day after the demonstrations.