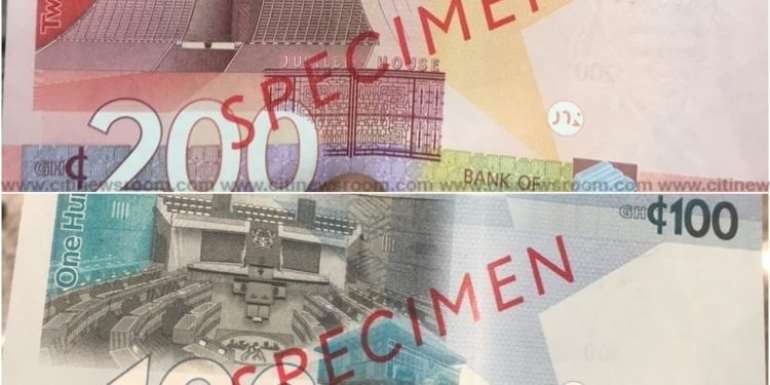 The Minority in Parliament is questioning the design and outlook of the new GH¢ 200 and GH¢ 100 notes introduced by the Bank of Ghana.

According to the Minority Leader, Haruna Iddrisu, the seeming monopoly the big six enjoy on almost every currency note, flies in the face of acknowledging the worthy contributions of other equally iconic Ghanaians in the country's history.

He maintained that the Central Bank must be innovative with designs on currency notes and consider other historical figures such as Yaa Asantewaa which the previous National Democratic Congress (NDC) had planned to do.

“We in the minority are not oblivious with the fact that Central Banks across the globe do undertake periodic reviews, between five to 10 years, of the structure and design of their currencies. Indeed this was why the effort started in 2016 under the NDC administration with new design concepts for all the denominations of the cedi.”

“The new designs were to be used to recognize illustrious citizens such as Yaa Asantewaa, Madam Esther Ocloo, Kwegyir Aggrey and others. Unfortunately, these have been discarded by the current administration and the portrait of the Big Six alone maintained,” he said.

The Minority Leader further lamented the idea of issuing higher denomination notes, saying that it may encourage criminal activities such as counterfeiting.

He noted: “We are living in times where most countries are rather eliminating higher value denominations in the fight against terrorism and other criminal related activities. It is a fact that these higher-value notes often fuel illegal activities and also become targets for counterfeiting.”

This was announced by the Governor of the Central Bank, Dr Ernest Addison at a press conference in Accra.

Explaining the rationale for the development, the governor said the face value of the cedi compared to the US dollar over the past 12 years had eroded due to sustained periods of high inflation and depreciation.

According to him, the new currencies will help shore up the value of the currency.

On the back of this, many individuals and groups have voiced out varying opinions on the introduction of the notes.

A Banking Consultant, Nana Otuo Acheampong, had earlier said that the introduction of the new notes will not cause inflation , as speculated by most people.

In his view, the new notes are rather a remedy to inflation following the redenomination of the Cedi in 2007.

“It was necessary to do this because from 2008 to date, inflation has eaten into the system. From 2008 to date, we have seen the depreciation of the currency and therefore, we have a deadweight syndrome whereby transactions cost go higher because we are using more cedis of currency for the same transaction. So if this will reduce our transaction costs, it is in order.”

But an economist, Dr Lord Mensah disagreeing to this opinion has said prices of goods of lower categories such as water will shoot up as a result of the development.

“For me, I think it has the tendency of causing inflation because when you are pricing, you will look at the minimum and what is convenient to handle and at the end of the day, the lower categories of consumption like water and others will start shooting up. The inflation that we have been struggling for it to come down over the years, we will end up going up again,” he noted. BoG Governor summoned to Parliament

Meanwhile, the Minority in Parliament has served notice of pushing for the Governor of the Bank of Ghana, Dr Ernest Addison, to be summoned in Parliament over the introduction of the denominations.

According to the Minority, the decision is unjustifiable and thus, the Governor must properly account to Ghanaians.

Haruna Iddrisu also vowed to track the process to ensure the money does not end up as funding for the governing New Patriotic Party's 2020 Campaign.

Assessment of ministerial nominees not on partisan basis – H...
3 minutes ago