I Am A Muslim, And I Hate Terrorists And Terrorism With Passion 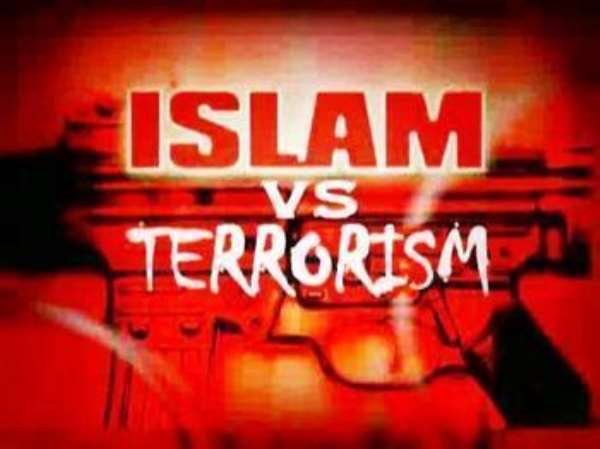 Terrorism is the use of violence or of the threat of violence in the pursuit of political, religious, ideological or social objectives. It is an act committed by non-state actors (or by undercover personnel serving on the behalf of their respective governments)

People who engage in these barbaric acts no matter their claims cannot be said to be advancing the course of Islam but rather their own self geographic political interest.

I am a Muslim. I profess and proclaim Islam. I am a practicing Muslim who believes in Allah and the Prophet of Islam Mohammed (PBUH) and all the prophets who came before him including prophet Issah -Jesus Christ - (Allah be pleased with him) In fact, no Muslim is a Muslim if he does not believe that Jesus Christ is the prophet of the Almighty Allah.

I believe Prophet Muhammad (PBUH) is the last of all the prophets. This perhaps could be one of the entrenched differences between me and others who profess different faith who do not believe in what I believe in. But such differences should not lead me or them into thinking that the only way to solve the difference is to resort to hate or commit terror against one another.

Never! That is not how the creator of the universe - the creator of creations and the master of the last day of reckoning intended the world to be - His intentions were far greater than what we have turned this beautiful world into. One of hate, deaths and despair.

I believe in the Quran, and I believe there is NO god except Allah. He alone is the sustainer and maintainer of the universe. He is the one and only. The supreme and the Mighty -there is non except Him.

My name is Mohammed Abdul Hanan EL-Saeed. I am a Muslim and a proud one at that. I am not a terrorist. I hate terrorists. I hate terrorism and I hate anything close to it. I hate any form of killing of any human beings anywhere in the world on the basis of religious beliefs, values, conceptions and even - mis - conceptions. I hate it.

Maybe I should repeat one more time - I hold the firm believe that there is no justification whatsoever for the killing of any human being either on religious, political or whatever grounds. There is no such basis at all. All lives are important, irreplaceable, priceless and cannot be taken under any circumstances.

I hate it when they say "Allahu Akbar" to kill innocent people. I detest it and it saddens my heart anytime I hear it. I get worried because I say the same "Allah Akbar" -Allah is Great - to praise Allah my maker when I go before him to pray.

The terrorist cannot be said to be doing what they are doing in the name of Allah. Allah does not instruct us to kill one another except to admonish us to respect life and protect life.

Going by the above, how can anyone in his right frame of mind justify any of the unnecessary, unwanted, unjustified and senseless killings going on around the world if truly that person is a Muslim?

No one is a Muslim unless he respects the word of Allah and does not misinterpret any of the verses of the Quran to suit his personal whimsical, parochial, political and selfish interest.

I despise terrorist because for some reason or the other, political or otherwise, they disingenuously misinterpret the Holy Quran, place propaganda twist or spin on them for the consumption of gullible minds to preach hate and advance global their interests.

In the same vain, I despise people who preach hate and propagate hate speeches against Muslims. I despise those who blindly and ignorantly call all Muslims terrorist. I detest those who call for the total annihilation and extinction of Islam and Muslims from the surface of the earth. I detest such people with passion.

I detest Donald Trump, the US President for his recent outburst against Muslims, Islam and plans to exclude people from certain countries from visiting the US. He should understand Muslims and Islam are not the problem of the world but people like Donald Trump who say what they say only to win political power.

I was terrified and shocked recently, when Donald Trump in calling for the complete shutdown of all Muslims entering the US released a statement citing poling data he says shows "there is great hatred towards Americans by large segments of the population"

He said also that, "until we (Americans) are able to determine and understand this problem and the dangerous threat it poses, our country cannot be the victims of tremendous attacks by people that believe only in Jihad and have no sense of reasons or respect for human life"

This is one of the worst forms of threat and an un-presidential speech you could ever hear anywhere. But thank God that not every American hold the same views about Muslims.

I particularly loved the response of Bernie Sanders, one time democratic presidential candidate who said that " Demagogues through out history have attempted to devide us based on race gender, sexual orientation or country of origin" they never succeeded and they will not succeed this time around.

This is why is shocking that somebody like Trump, President of America wants Muslims to be excluded from America, the greatest nation on earth for reasons best known to him.

Hilary Clinton couldn't have put it any better when she twittered in apparent response to Trump's "madness" that "this is preposterous, prejudiced and divisive, you don’t get it. This makes us less safe"

This "madness" by Donald Trump cannot be said to be the best solution to the problems and challenges of terrorism and extremism facing the world, America and the American people today.

The following are some the reasons why I believe Trump will fail to perpetuate his hate agenda against Muslims. History is not on his side on this one.

Trump as the President of America is unfortunatelyhas showing traits that are somewhat close to that of Hitler which he should be urged to do away with. I think America and the American people owe the rest of the world a duty not to let Trump deceive them into believing that Muslims and for that matter Islam is the problem of this world.

It is an undeniable fact that majority of peace loving Muslims around the globe are against what the few people who describe themselves as Muslims do in the name of the beautiful religion.

So rather than preach hate against Muslims, we should support the majority of them to expose the few who do the bad things in the name of the beautiful religion of peace -Islam. Salaam

No retreat, no surrender — Ablakwa chases gov't for cost of ...
3 minutes ago

Akufo-Addo, Bawumia responsible for 60% of Ghana’s total pub...
4 minutes ago