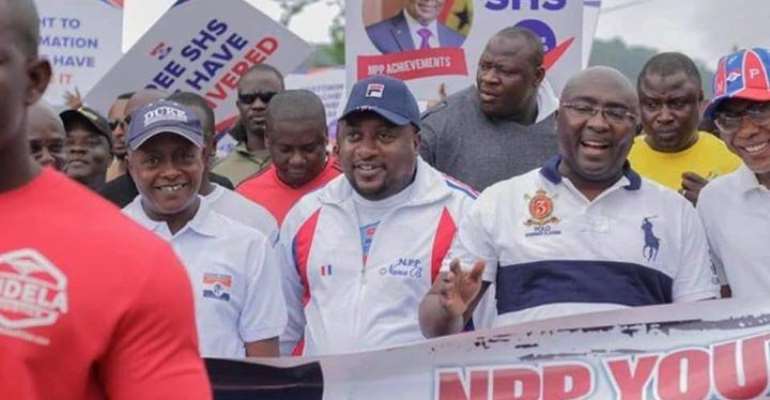 The Vice President, Dr. Mahamudu Bawumia, has led the NPP youth wing in a health walk in Tamale, the Northern region.

The walk was aimed at canvassing support for the party towards the 2020 general election.

The Health walk which ended with a rally at the Aliu Mahama Sports Stadium brought together thousands of youth and supporters of the New Patriotic Party(NPP) across the Northern region.

Addressing party supporters at the rally , Dr. Bawumia said the NPP has performed very well in three years as compared to the National Democratic Congress (NDC).

“Before the NPP came into power, the country was in deep crises ranging from Dumsor, tax increment, research, teachers and students allowance were abolished, unemployment rate was high and many others,” he said

“John Mahama might be a nice man but he is an incompetent nice man, the presidency is not for nice men,” he added.

Dr.Bawumia mentioned 85 sectors that the NPP adminstration has perform far better than the NDC including restoring of teacher training allowance, one district one factory, National Identification Cards, one district, one dam, Free SHS , NABCO among others.

He urged the youth to rally behind NPP for more jobs and prosperity to better their lives.

The National Chairman of the New Patriotic Party, Freddie Blay, stated that though the country is no yet out of the challenges the ND left behind , the performance of the NPP is far better than what the NDC did, adding that one good term deserves another.

The NPP National Chairman said the Akufo-Addo led administration has stabilized the economy, reduced interest rate, and also reduce the unemployment rate, something the NDC could not do.

Mr. Blay noted that the success of the NPP in 2020 depends largely on the youth and called on them to support the party massively to continue the transformation agenda.

“This is not to say, we are living the entire work to the youth but to indicate that, you, the youth should contribute massively for the NPP to win power in 2020”. he said.

“We want to develop this country not for the NPP but for the benefit of all Ghanaians, the youth have better chances with NPP than with the NDC” he added.

He however cautioned the youth not to hand over the affairs of the country to the incompetent NDC but should rally behind the NPP to ensure a better country.

The youth led by the Northern Regional Chairman, Adam Samba , assured the party of massive votes in the region come 2020 general election.