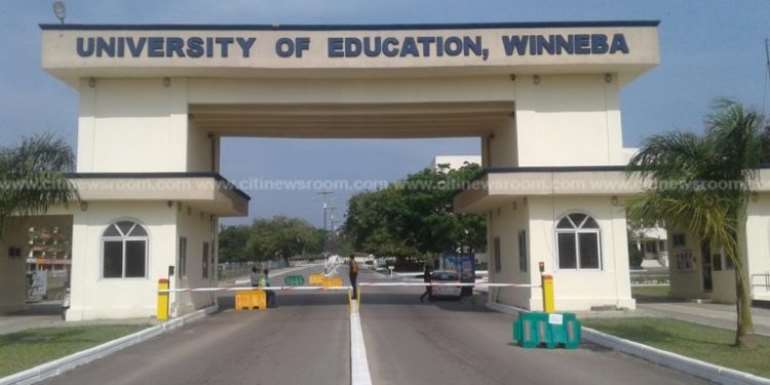 It is with the highest spirit of hopeful joy, peace and love that I write to you this second open letter. I am really overwhelmed that you have lived up to my expectation in respect of “I wish you the best of British!”

Sadly, you have ignored all the good advice in my previous open letter to you and now you seem to be basking in the eddy currents of the UEW 'Pharaoh' leadership (i.e. headteacher and primary pupils' relationship).

Can't you realise you are not your normal self anymore? I want to wake you up from the “spell influence” over you since you attended the 19th September 2019 commissioning of the 5-storey block of flats at the UEW North campus, SSNIT Road, Winneba.

Critical followers of UEW issues believe you are failing the President in his choice of you as a better Chairman of the Governing Council. Things happening under your watch are shameful, lawless and unacceptable by all sane people.

A quick recap of such embarrassing happenings will awaken you and the other government appointees on the Council.

Firstly, without any proper due diligence, your council approved Prof. Mrs. Ruby Hanson as acting Pro-Vice-Chancellor during your first council meeting in UEW. Time has shown that such a decision was in haste and shameful in that it breached UEW Statutes that you are supposed to protect.

In case you failed to read, let me remind you that Statutes 7 states inter alia that (Statute 7b) “the Pro-Vice-Chancellor shall be elected by Convocation and appointed by Council” and Statutes 7d states that “in the event of a temporary absence of both the Vice-Chancellor and Pro-Vice-Chancellor, from the University or when both posts are vacant, the most senior Dean shall act until Council is able to make a formal appointment.”

I am sure with hindsight, you are aware of the blunder you have caused. Prof Ruby Hanson was neither elected by convocation nor was she the most senior Dean, yet you approved her as acting Pro-Vice-Chancellor.

Secondly, one Andy Ofori-Birikorang has been confirmed as a substantive Pro-Vice-Chancellor during your second council meeting, some few days ago.

This unpopular decision received great opposition by three of the government appointees on the council, yet you failed to follow our President's consensus-building example.

It is alleged that against sound advice that a court injunction application has been served on the institution, through the Librarian, who is one of the five Principal Officers of UEW, you accepted the hook, line and sinker arguments of the TEWU representative, Registrar and other allies on the council to pass the said Ofori- Birikorang.

I believe time would let you realize that Ofori-Birikorang’s promotion to ‘Associate Professor’ sins against UEW criteria for appointment and promotion of Senior Members.

Thirdly, the irresponsible victimization that happened under the Prof Abakah led-Council is still ongoing under your leadership.

It is alleged that the most experienced and competent Senior Deputy Registrar of UEW has been wrongly removed from her post of Ajumako College Registrar to an obscured office in Winneba. This is gender discrimination.

A Senior Assistant Registrar who was promoted to that rank, just two years ago, has replaced her in Ajumako. As if that was not enough, without any legal basis or reasonable administrative process, salaries of two lady secretaries at Ajumako campus have been withheld, as well as that of the Acting Finance Officer, Bruno Chirani.

Are you really in charge as chairman of the council? How can you deny staff their earned salaries?

Fourthly, it is alleged that the acting Finance Officer who is in court against the appointment of another Finance Officer in his place was suspended by you at the last council meeting.

May I ask “Did you appoint him to the council”? You are not the appointing authority to suspend a council member, because corporate governance ethics and rules do not allow such acts. I call this shameful and lawless because how can you suspend the petitioner and retain the respondents in a case of financial and procurement breaches?”

Finally, what has become of the petitions that the Minster of Education gave you when he inaugurated your council? Even the so-called committee you have put together seems to be trophies in a cabinet.

What are you doing about the wrongfully dismissed staff of UEW whose petitions are in your hand?

Due to the dark clouds hanging over UEW i.e. poor promotions, bad press, innumerable court cases, wrong dismissals, transfers, suspensions, demotions to mention but a few, if you do not work positively and restore hope for the hopeless staff, God's hand will move to demonstrate that HE is the LORD GOD in the Bible!!!

In conclusion, I want to ask you to justify why the President of the Republic of Ghana, made you the Chairman of the Governing Council so that your international experience will impact positively on UEW and beyond.

Make your Christmas holidays worth enjoying!!!