'Made in Bangladesh': exploited women factory workers fight back 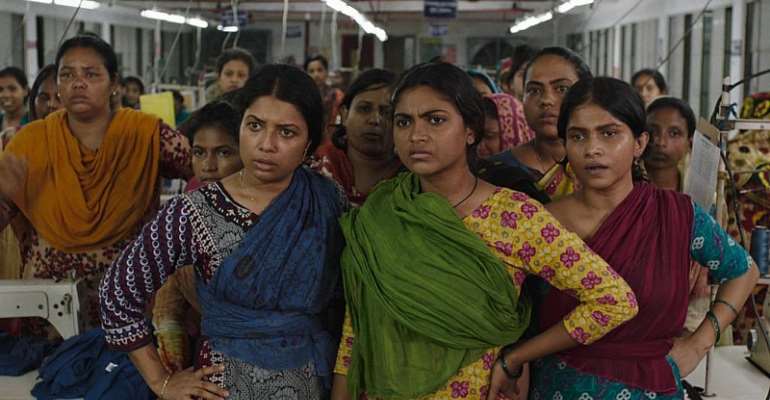 Released in France during a crucial week of strikes in the country, Robayat Hossain's film Made in Bangladesh offers a singular portrayal of women workers who are fighting for their labour rights. A raw critique of corruption and patriarchy in Bangladesh.

Made in Bangladesh foretells a hellish journey into a textile factory in one of the world's poorest countries.

As the lights go off in the theatre, the film starts with a fire, echoing the 2013 Rana Plaza tragedy.

We see rows of women behind sewing machines, working so late that they have to spend the night like sardines on the factory floor. Hovering nearby are abusive and manipulative managers.

But this is just the film's backdrop.
Director Robayat Hossein's main focus is not the working conditions in the factories, but the social condition of poor and uneducated women in Bangladesh in general. And more importantly, their fight to gain dignity in the workplace and at home.

'Married or working, we're done for either way'

Based on a true story, Made in Bangladesh was presented at the Toronto Film Festival this year.

The films tells the story of Shimu, a young factory worker, who struggles to make ends meet in a squalid Dhaka slum. Her salary has been unpaid for months, her husband is unemployed, and she faces daily abuse from factory managers.

Along comes a well-spoken female journalist, who provides financial help and urges Shimu to form a trade union.

"Your workshop makes more than a thousand T-Shirts a day. Do you know that the price of two of those T-Shirts is more than your month's salary?" she tells Shimu.

Shimu's ensuing battle to form and register a workers' union gives us an intimate look at Bangladeshi society and class politics.

Fellow-workers are afraid to sign up, factory managers threaten her, even her husband orders her to leave the factory and wear the Islamic hijab.

And finally, when all obstacles appear heroically overcome, the Ministry of Labour refuses to register her union, citing "pressure from above".

In short, we witness a society where the poorest of the poor have to eat rotten rice to survive. Where politicians, in collusion factory owners and foreign entrepreneurs, try to maintain an industrial system akin to modern slavery.

Where impoverished and uneducated women have to adhere to repressive Islamic laws at home, or physical and psychological abuse in the workplace, often both.

As Shimu tells her colleague, "married or working, we're done for either way".

Good versus evil, nothing in between?
However, in this stark portrayal of Bangladeshi society, the characters often come across as overly opaque. All men are portrayed as brutes, and most women as exploited and abused victims, leading to an overly simplistic depiction of the country's gender inequalities.

“I can't help it. That's the reality”, Robayat Hossein told RFI in an interview.

“The way labour is structured in the factory is that women always work as machine operators… they're unable to rise up to the ranks of supervisors or managers.”

Inspiration from films, echoes in real life
To the film's credit, there are clever strokes of post-war Italian neo-realism in the depiction of the Dhaka slums.

"I have been inspired by [classic Bengali film director] Satyajit Ray, who himself was inspired by Italian neo-realism, so maybe that comes through", Hossein commented.

According to Hossein, who studied cinema in New York, the main influences behind Made in Bangladesh were the Dardenne Brothers and Ken Loach, both known for portraying social misery and class struggle.

The films Norma Rae, about a worker in a textile factory and Nothing but a Man, about an African-American rail worker, were also key influences, Hossein said.

The director also commented on the irony of the film's release in France where strikes over working conditions and pension reforms have paralysed the country's infrastructure.

The air of revolt, it seems, has no frontiers.