People make a living out of wine, but it's also killing them: welcome to the French paradox 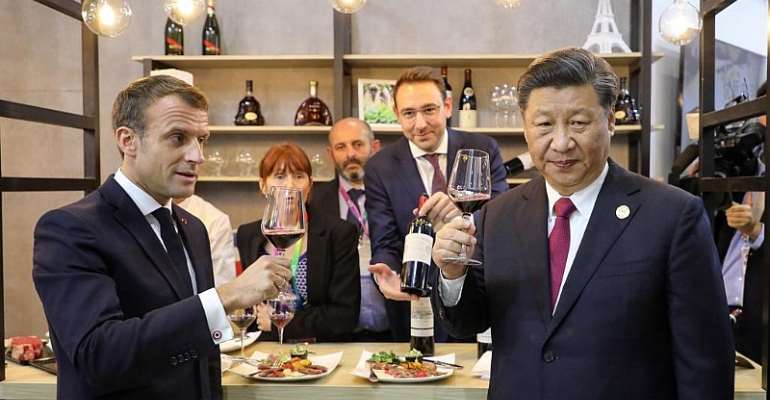 France has replaced plans to promote "Dry January" - a UK initiative to stay off the booze for a month - with "Janvier Sobre" encouraging people to limit their intake to two glasses a day. Advocating abstinence in a country where two-thirds of its regions are wine-producing is complicated.

More than 40,000 people died of alcohol-related diseases in France in 2015, and the French National Association of Prevention of Alcoholism and Addictions has been pushing for a "Dry January" campaign here, based on a UK programme which organisers claim has helped four million people reduce their alcohol consumption.

It looked set to happen but President Emmanuel Macron had a change of heart, reportedly under pressure from wine lobbies.

Exasperated, a number of groups fighting addiction have decided to go it alone, launching the Défi de Janvier (January Challenge).

We talked to journalist Thomas Pitrel, co-author of Tournée Générale (a round of drinks), about why alcohol in France is so much more than a drink.

This interview, edited for clarity, was produced for the Spotlight on France podcast.

Thomas Pitrel: All parts of French society can be explained through the relationship with alcohol: in culture, books, songs everybody is talking about it, everybody has a relationship to it. That's why in the book we start by talking about the people who don't drink because even the people that don't drink always have to explain themselves. Why don't you drink?  Why don't you drink champagne when it's a celebration? Are you sick or is it something religious? No, there are just some people who don't want to drink and in France they have to explain why.

RFI: In February 2018 President Macron boasted he drank wine everyday, at lunch and at dinner. He seemed to be supporting the French wine sector.

TP: I need to point out it's not like that for President Macron's followers because the consumption of wine in parliament in France has gone down by 50 percent since the new MPs arrived. People are not drinking so much at the bar of the Assemblée Nationale. It's a new generation of politicians, the average age is 10 years less and there are more women. It looks like this generation is not drinking so much at least during the day. It's an evolution of French society  - people are not drinking at lunch anymore.

RFI: And less for breakfast! You used to see people having a glass of red wine at breakfast. You even had kids going to school on wine. The law banning alcohol in schools wasn't introduced until 1981.

TP: And you can still find documents about how back in the 1950s miners could drink up to 12 litres of wine a day. It was hot in the mines and they sweated a lot. But that's evolved as the type of jobs people are doing has changed. Fewer people work in the fields, in factories, doing very physical jobs. Before, people were drinking wine because the State promoted wine as a healthy drink, healthier than water. That's why there was wine in schools and on every table at lunchtime in France. It's changed.

Talking about Macron in particular, when he says 'I like one glass of wine for lunch and one for dinner' it's a way for him to say 'I'm supporting wine in France but the good wines'. And while he's saying this he's thinking about the impact that it can have on the economy.

RFI: You say in the book that alcohol - wines and spirits - are France's second biggest source of revenue after the aeronautics industry. It's clearly a huge economy. Does that suggest Dry January won't take off here?

TP: Yes but French people are drinking less and less wine. Wine consumption is 2.5 times less than it was 50 years ago. Wine is produced more now to sell in other countries. So when we say it's important economically it's also because we are selling it to the U.S., to China…

But France still wants to have the image of a country where people are drinking a lot of wine. We don't want to say 'the French are not drinking for one month in January' because it would mean wine is an alcohol like another one. And that's one thing the wine industry doesn't want. They don't want it to be like beer, vodka and so on. They want to say it's like an art de vivre, something really important to have with food.

What the wine industry doesn't want with the Dry January is for people to think that wine is an alcoholic drink; they want people to forget that.

RFI: There's a chapter in your book called the La Guerre des Lobbies (war of the lobbies) so on the one hand we have the pro-wine lobby on the other the anti-addiction lobby. Where does the balance of power lie?  Is the wine lobby within parliament that powerful?

TP: Firstly I should say people in France have a very bad image of lobbies. When you think about lobbies in France you think about bribes, about people paying politicians nice dinners to make them vote in one way or another. It's not like this in the wine industry in France. I haven't seen examples of people from the wine industry giving money to politicians to influence them.

But the point is that they don't need to do it, because more than half of MPs in France have wine in their territories [66 out of France's 96 départments are wine-growing] so in a way they have to defend wine. Wine relates to jobs jobs <[a target="_blank" href="http://www.intervin.fr/etudes-et-economie-de-la-filiere/chiffres-cles">85,000 nationwide], landscapes, it's very important in social life. So the wine industry, the wine lobbies don't really have to do anything. MPs know what's in their interests.

That's why it's not so easy to say, as some associations are saying, that it's the fault of the powerful lobbies of the wine industry.

It's not so easy for MPs. They're a bit trapped. It's hard for them to work out how to deal with the health problem because there is a health problem in France with strong alcohol and wine.

RFI: A report by the OECD showed France is the third highest consumer of alcohol among 36 OECD countries and France's public health body estimated 41,000 deaths in 2015 were related to alcohol.

TP: Yes, it's a little bit less than before, but still a lot in relation to other countries. And there's not much of a policy around it.

RFI: So this is what you call in the book the French paradox: on the one hand needing wine because it's such an important part of the French economy and at the same time needing to respond to concerns over public health. At the end of the day where does France stand on this question?

TP: It's hard because this paradox is even within the government itself. The health minister [Agnès Buzyn] is in favour of doing Dry January, of fighting the problem of alcoholism. But when you talk to the agriculture minister [Didier Guillaume] he's saying the opposite. There's no middle ground.

It's hard to have a real discussion and like we say in the book: people are making a living from wine and at the same time wine is killing people. We need to talk about it.  And we start by saying 'yes, wine is part of the problem'.

You have to find a balance and the balance is more on the side of the wine industry than the other I think. But it can evolve. The State needs to organise a debate.

VIDEO: Central bank backed digital currencies is the way for...
11 seconds ago