French government does not give in to strikers, strikes to continue 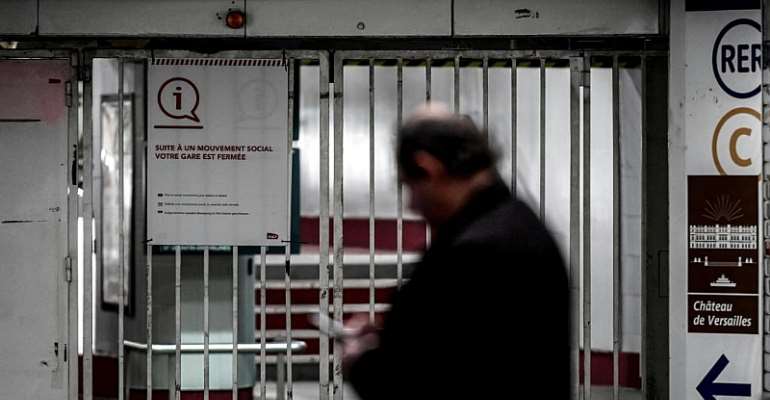 The French government on Friday expressed determination to go ahead with far-reaching pension reforms in the face of the biggest strikes in years, which have brought public transport in much of the country to a standstill. Strikes began on Thursday, continued on Friday and are set to go on through the weekend into next week.

Most high-speed trains were cancelled, flights were affected and most of the Paris metro shut down in a major challenge to the ambitious reform agenda of President Emmanuel Macron.

The turmoil is expected to continue over the weekend and through until at least Tuesday when unions have called more nationwide protests to follow mass rallies on Thursday that brought over 800,000 people onto the streets.

Prime Minister Edouard Philippe insisted that the government would not abandon a plan which would require the French "to work a bit longer."

He pledged to work with trade unions to introduce a single "fairer", points-based pension scheme for all, scrapping the 42 more advantageous plans currently enjoyed by train drivers, soldiers and a host of other workers in the process.

Refineries blocked
Pending a government decision, dozens of trains, metros and flights were cancelled, many schools were again closed or offering only daycare, and four of the country's eight oil refineries remained blocked on Friday.

Half of the Eurostar trains between Paris and London were dropped, and just two of three Thalys trains serving Paris, Brussels and Amsterdam were running.

Yellow Vests
On Saturday, another round of yellow vest protests is announced as well in multiple locations in Paris. According to demosphere, the website that lists protest marches, the biggest one will start in Austerlitz and goes to Porte de Versailles and another one will take place around Montparnasse Station.

Meanwhile, unions on Friday called for a new day of mass protests and strikes next week. "Everybody in the street on Tuesday, December 10, for a new day... of strikes, actions and protests," Catherine Perret, a senior member of the CGT union, France's biggest public-sector union, told reporters after a meeting of four unions. The Parisian public transport system RATP said that 9 metro lines will be closed completely, while the rest will operate on a reduced service.

French national rail company SNCF 'advises travelers to postpone their trip' if possible, since traffic will be 'strongly reduced' on 7 and 8 December while it will remain 'heavily affected' on Monday 9 December.

Eurostar cancels 11 trains on Saturday, 18 on Sunday, 17 on Monday and 13 on Tuesday, while Thalys “reduces the number of connections and plans to operate 2 out of 3 trains on December 7, 8 and 9” for the coming days.

Until now, about one fifth of the flights from and to Paris were affected by the strikes, but French aviation authority DGAC told AFP that it will "not ask airline companies to reduce their flights on Saturday."

Save Keta Municipal Assembly from bleeding - Protestors to A...
10 minutes ago