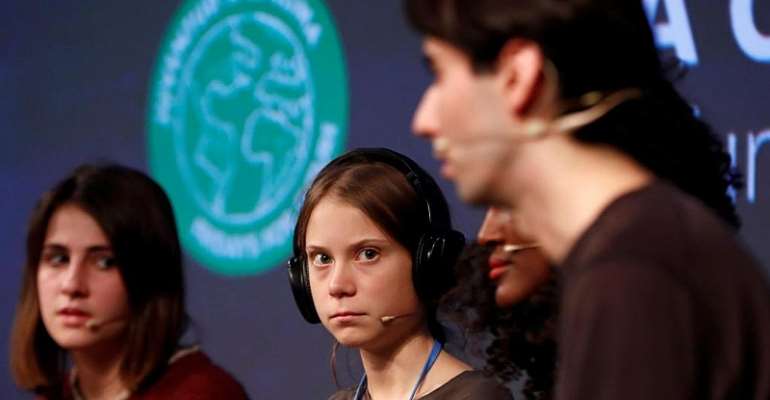 Climate activist Greta Thunberg has arrived in Madrid to join thousands of others in a march to demand world leaders take real action against climate change.

After making it through a swarm of media cameras and microphones at the Spanish capital's northern train station, the teen eco-warrior Thunberg posted an ironic tweet saying that she had “successfully managed to sneak into Madrid.”

"I don't think anyone saw me," she added. “Anyway it's great to be in Spain!"

Madrid is hosting two-week, United Nations-sponsored talks aimed at streamlining the rules on global carbon markets and agreeing on how poor countries should be compensated for destruction largely caused by emissions from rich nations.

An official directly involved in the negotiations said that despite a few setbacks, the technical negotiations were progressing, although many issues were being left for ministerial-level meetings in the summit's second and final week.

The official, who asked to remain anonymous given the sensitivity of the discussions, added that a political declaration on greater “ambition"   a buzzword at the summit   was shaping to be “difficult to achieve.”

“A summit that doesn't end with enhanced ambition would be something that nobody would understand if we take into account what the streets and science are telling us,” the official said.

The talks came as evidence mounts about disasters that could ensue from further global warming, including a study commissioned by 14 seafaring nations and published Friday predicting that unchecked climate change could devastate fishery industries and coral reef tourism.

Thunberg paid a surprise visit to the venue of the talks and joined a group of some 40 teens staging a sit-in there to demand real action against climate change.

Holding hands, the teens sang a version of John Lennon's “Power To the People” and displayed banners with the logo of Fridays for Future, the global climate movement inspired by Thunberg.

In the presence of dozens of media cameras and curious summit participants, the protesters exchanged chants: “What do you want?” “Climate Justice” “When do you want it?" “Now!”

Thunberg did not appear unsettled by the commotion surrounding her presence.

"It's absurd. I laugh at it. I do not understand why it has become like this," the 16-year-old was quoted as saying by Swedish newspaper Aftonbladet, whose reporter rode with them in an electric car in Madrid.

While Thunberg seemed bemused by the attention, her father Svante was startled, saying it was “total madness.”

“I have never seen anything like this,” he told Aftonbladet.

The study commissioned by seafaring nations says climate change could cause hundreds of billions of dollars in losses by 2050, adding that limiting global warming would lessen the economic impact for coastal countries, but that they also need to adapt to ocean changes.

The authors said fish will migrate to cooler waters as oceans heat up and become more acidic, jeopardising some fishing communities. While regions near the equator will suffer fish stock declines, the report forecasts increases in Arctic and Antarctic Oceans

Demands for greater action by non-governmental organisations and a whole new generation of environment-minded activists were expected to take the spotlight with the presence of Thunberg in Madrid.

‘There Won’t Be Conflict After December Elections’ – Akufo-A...
24 minutes ago

Add Us To Bank Customers You Want To Settle – Menzgold Custo...
24 minutes ago