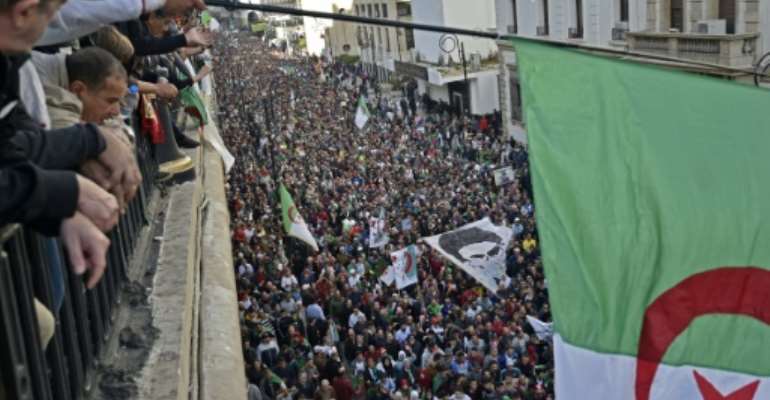 Algerians wave a national flag from a balcony as they watch anti-government demonstrators march in the capital Algiers on Friday. By RYAD KRAMDI (AFP)

A vast crowd rallied in Algiers on the final Friday before a contentious presidential election many see as an elite attempt to cling to power despite months of protests, an AFP journalist said.

"No to voting, we swear we will not stop!" protesters chanted. "No retreat!"

The poll set for next Thursday will see five candidates linked to ex-president Abdelaziz Bouteflika, who was forced out of office by huge rallies in April, compete for his job.

Two of the approved runners even served as prime ministers during the ex-strongman's two-decade tenure.

In the absence of an official tally, it was impossible to estimate the size of Friday's mobilisation.

But it appeared to be the biggest rally since November 1, when citizens took to the streets and demanded a second "liberation" on the 65th anniversary of the start of the war for independence from France.

Protesters on Friday also shouted their support for a general strike set for Sunday and demanded civilian -- rather than "military" -- rule.

A firm and consistent proponent of elections, the army chief on Tuesday called for a massive turnout in the poll, slamming what he dubbed detractors' "plotting against the fatherland".

But the crowds on Friday shouted a sharp rebuke: "Gaid Salah, forget the vote!"

Friday marks the 42nd consecutive week the "Hirak" protest movement has organised marches across the country. 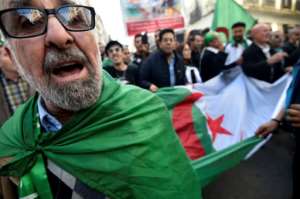 "I am not against voting (per se), I am against this election because it is only serving to recycle Bouteflika figures," said Fatiha Bendahmane.

Former prime ministers Ali Benflis, 75, and Abdelmadjid Tebboune, 73, are considered the frontrunners in the presidential vote.

Three other figures who either participated in Bouteflika-era governments or supported the former strongman have also been cleared to run.

"We will have a new name but the same policies that destroyed the economy of this country," said Bendamane, a 55-year-old teacher preparing to demonstrate in Algiers.

"I will march today to say no to voting with this regime."

Checkpoints outside the capital were only letting in vehicles registered in Algiers, an AFP correspondent reported on Friday morning.

Busloads of plain-clothed and anti-riot police were deployed to the city centre, equipped with water cannons.

According to Amnesty International, Algerian authorities have "escalated their pre-election crackdown on protests" in recent weeks, "carrying out waves of arbitrary arrests".

Crime Fighting Takes New Turn With The Installation Of 10,00...
5 minutes ago