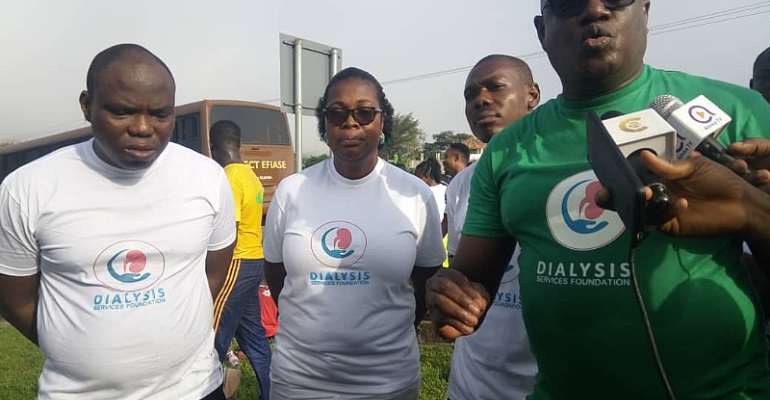 Doctors in Ghana are said to be close to declaring kidney disease as an epidemic in the country.

Chairman of the Dialysis Services Foundation, Prosper Bani, made this known in an interview with the media over the weekend during a kidney awareness walk organized by the Foundation and held under the theme: Walking for healthy kidneys.”

He noted that there were rising numbers of Ghanaians battling with kidney disease across the country.

According to him, judges, doctors, lawyers and Members of Parliament were all at risk of kidney disease.

Mr. Bani added cost of treatment has become a serious burden for patients.

He stated that patients with acute kidney ailments have to go on dialysis three times a week, with each dialysis section costing GH¢ 320 at Korle Bu Teaching Hospital.

He has therefore called for a healthy lifestyle amongst Ghanaians.

Dialysis Services Foundation is working to educate the nation about the menace of end-stage kidney disease and associated illnesses.

Already, the Foundation is supporting needy patients who cannot afford dialysis and intends to increase its capacity to support more of such groups of people whose only other alternative is death.

The Awareness Walk has a goal to reach out to one thousand people with this message and raise some urgently needed funds to assist some of these critically ill patients.

The initial target is to raise GH¢ 3 million through these initial campaigns.

Don’t incite the youth to protest – Nana B warn failed MMDCE...
31 minutes ago