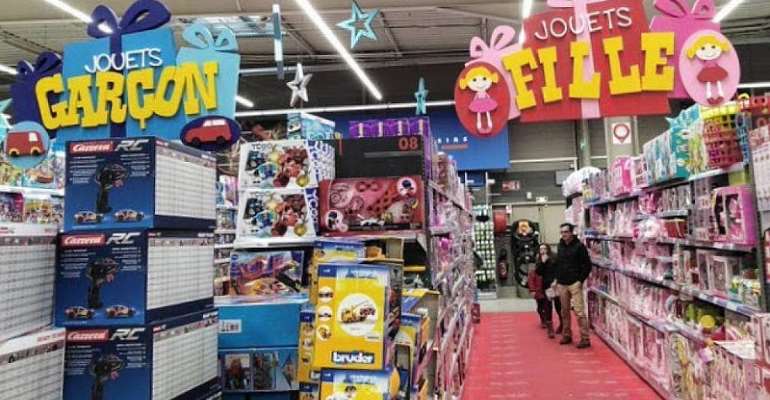 Walk into most any toy store in France, and the colours will hit you: on one side pink boxes of dolls, on the other, blue boxes of cars and construction kits. In Strasbourg, one store is trying to change this by offering a setting where toys are neither for girls or boys. They're just toys.

Joy Fleutot walks into a toy store in the centre of Strasbourg and heads to a shelf with digital toys, most offered in a blue or pink version.

“Look here, there is a girl on the packaging of the pink one, and a boy on the blue one,” she says, pointing to two boxes of toy cameras.

Further inside a wall of dolls. They stare unblinking out of pink boxes that feature photos of girls. Nothing on the packaging indicates that these dolls are for boys.

Across the aisle the palate turns blue. “It's cars,” says Fleutot. “A lot of cars.”

This visit is a kind of market research for Fleutot, who is about to open her own toy store down the street. But no pink/blue separation here: Joy Concept will be a gender-neutral toy and clothing store, one of the first of its kind in France.

> This story is part of the Spotlight on France podcast (click to listen):

This goes along the lines of what the French government says it wants to see. In September it signed agreement with toy manufacturers and distributers, urging the industry to show “measurable” efforts to better mix up the presentation of toys.

For Fleutot, it's about presentation. The toys in her store, which is due to open mid-December, will be the same as any other toy store. But the packaging will be different and they will be presented differently, “with everything in the same space and no boy or girl stereotypes".

"There will be dolls, but not in pink boxes with pictures of girls on them. Just dolls."

A business with a mission
This is Fleutot's first business venture, and she's approaching it as a kind of mission, which came from a process of realisation that gender stereotypes start with kids, and the kinds of toys and clothes they have.

Fleutot went to school for marketing, where the first thing she was taught was to separate clients by sex.

“You decide if you are going to sell to a man or a woman. After that come all the stereotypes: women are soft and feminine,” she says. “But I'm not like that! And I'm a woman, so there is a problem.”

Faced with that contradiction, she started having conversations about gender roles and she read about feminism. When she finished her degree and wanted to open her own business, she remembered an eye-opening class on gender marketing for kids.

She was surprised to read case studies about brands emblazoning the words "pretty" on pink shirts intended for girls and "brave" on blue shirts for boys.

“I also discovered that the companies that sell pink and blue things sell more,” she says, giving the example of bicycles. Someone who buys a pink bike for a girl would have a hard time convincing her little brother to use it later. “So the company actually sells more.”

She decided that she would open a shop selling unisex clothes and toys, to encourage people to buy less, but better.

“If you buy a gender-neutral, high quality shirt, you can keep it and give it to all the other kids you have in the family, boys or girls,” she explains.

Strasbourg was a good place to open this business, she found, as there is an existing customer base of people interested in alternative ways of consuming: buying food directly from producers and looking for local products.

Changing mentalities
Fleutot says she has seen approaches to gender shift over the last two years in France after the #MeToo movement.

“Before that, everyone told me I was crazy to do this and it wouldn't work, and that clients want pink and blue things,” she says. “But after the #MeToo movement society is changing, and people are starting to see sexism.”

And yet, it is not all positive. She has received negative feedback on social media, with people accusing her of trying to erase kids' genders.

“Someone told me that that the next step is to remove kids' genitals. No! I just want not to put kids in a box because of their genitals,” she says. “I want options in this store. A girl who wants a car can get it because it's there in front of the dresses and everything else.”

A boy who wants to wear a pink shirt can find one at her store. It might not be easy for him to wear it in the France of today, but she wants to make it easier.

“It will difficult for him, because at school or at the grocery store, there will be people who don't like it, and will say it – even to a kid,” says Fleutot.

“But I think we need offer gender-neutral products, which will lead to open-minded people, and after that, boys could wear pink with no problem.”