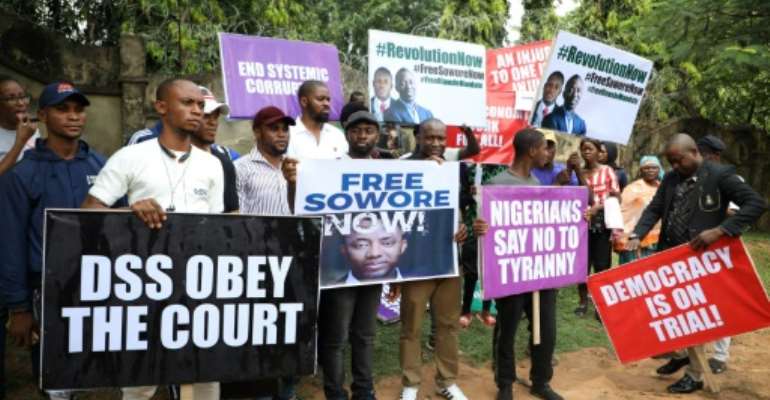 Omoyele Sowore's supporters have been protesting for his release after he faced treason charges. By Kola Sulaimon (AFP)

Nigerian state security police on Friday re-arrested an opposition activist and former presidential candidate, a day after a court ordered him freed, his lawyer said.

Omoyele Sowore and his co-defendant Olawale Bakare were freed on Thursday after months in detention over an alleged online call for rebellion against President Muhammadu Buhari.

"Sowore has been re-arrested. He is being detained by the DSS (Department of State Service)," attorney Femi Falana told AFP, referring to the domestic intelligence agency.

"The DSS had attempted to arrest him in court but were resisted by the people and to avoid violence, I personally drove him to their office," he said.

Falana said the security agents promised to release him after interrogation.

"The DSS said he was needed for more information on his trial and promised to release him later in the day," he said.

A DSS official was not immediately available for comment.

Sowore, 48, ran unsuccessfully against Buhari in February elections. He has been one of the president's fiercest critics.

Sowore, who runs the news website Sahara Reporters which regularly reports on official graft, had called for nationwide protests against misrule in Nigeria.

He was in court on Friday for his trial when the security agents tried to take him again, his lawyer said.

Television footage of the scene showed Sowore being rough-handled as he struggled with the security operatives.

Falana said it was "wrong for the DSS to arrest my client without any court order," vowing to challenge his fresh detention.

The pair had been released hours after a judge gave police 24 hours to free Sowore. He had been held since August by the DSS after urging protests under the online banner "#RevolutionNow".

In October, a high court in the capital Abuja ordered that Sowore and Bakare be released on conditional bail, but the authorities kept them locked up.

They were accused of "treasonable felony", "cyberstalking" the president and money laundering, among other charges.

Local rights and transparency group Socio-Economic Rights and Accountability Project (SERAP) on Friday condemned Sowore's re-arrest, describing it as "a mockery of justice and abuse of the judicial process."

It urged the authorities "to immediately and unconditionally release" the activist and "end the fragrant attack on the rule of law."