Supporting policies and infrastructure crucial for effective implementation of AfCFTA 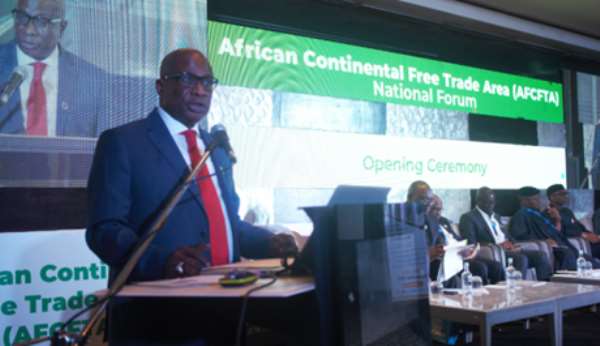 For the African Continental Free Trade Area (AfCFTA) to have a positive influence on long-term investment in Africa’s productive capacities, there is need for the continent to develop appropriate supporting policies, build requisite infrastructure and ensure an educated work force.

This was said Monday by the United Nations Resident and Humanitarian Coordinator, Edward Kallon, during Nigeria’s AfCFTA Forum that is underway in Lagos under the theme; Effective Implementation for Industrialisation and Inclusive Development in Nigeria.

“We will need to actively promote productive employment and decent work, women’s empowerment and food security, and reduction in inequalities,” said Mr. Kallon during the high-level Forum.

“The United Nations is here to support Nigeria to make the AfCFTA work for the county’s people, for the micro, small and medium enterprises, and for the women and youth entrepreneurs.”

To aid this process, the Economic Commission for Africa (ECA) recently carried out modelling exercises on the expected impact of the AfCFTA on Nigeria’s economy, trade and welfare.

They found that following the implementation of the AfCFTA, both GDP and Nigerian exports were expected to increase.

The AfCFTA would be a game changer when it comes to stimulating intra-African trade, the UN Resident Coordinator said, adding Nigeria’s exports to the continent would increase significantly by between 10 percent and 15 percent in 2040, compared to baseline without the AfCFTA in place.

The increase in Nigeria’s exports to its African partners would be most pronounced in agricultural and food sectors closely followed by industrial sectors, thereby offering invaluable opportunities to industrialize through trade.

“The more ambitious the trade liberalization the greater the expansion of Nigerian exports to its African partners,” said Mr. Kallon.

He said making the AfCFTA a reality for Nigeria would require creating national institutions for implementing the agreement, in addition to institutional coordination mechanisms for execution between public sector, private sector and donors.

For his part, Mr. Willie Shumba of the Africa Union Commission’s Trade and Industry Department, said; “The AfCFTA will assist the Federal Republic of Nigeria in meeting the objectives of the Economic Recovery and Growth Plan of Nigeria by turning around economic performance and lay a solid foundation for sustained inclusive growth.”

He said the AUC is excited to participate in the Forum which he said is an important sensitization and engagement with stakeholders as the clock ticks towards implementation.

National President of the Nigerian Association of Chambers of Commerce, Industry, Mines and Agriculture (NACCIMA), Mr. Hajiya Saratu Iya Aliyu, said successful implementation of the AfCFTA was of crucial importance to Nigeria.

“This is because it has the potential to generate a range of benefits for Nigeria by its ability to support trade expansion, create employment, improve national prosperity and tackle poverty,” he said, adding for this to become a reality issues of trade policy, trade facilitation, productive capacity of the private sector, the need for trade-related infrastructure, finance, trade information and market integration must be tackled.

For his part, Mr. Mansur Ahmed, President of the Manufacturers Association of Nigeria, said Nigerian manufacturers can compete well on the continent if the right policies and regulations were put in place to make manufacturing more cost effective.

“Good infrastructure is also crucial to help Nigerian manufacturers. If we eliminate barriers there is no reason that we cannot compete successfully in Africa,” he said, adding engagement was key along the way as the continent prepares to implement the AfCFTA in July for every stakeholder to have clarity on issues.

The ECA forecasts that the AfCFTA could boost intra Africa trade by 52 percent, with the industrial sector forecast to gain the most. GDP and exports would increase by US$ 44 Billion and US$ 56 respectively and AfCFTA could potentially increase jobs and move informal traders into the formal sector.