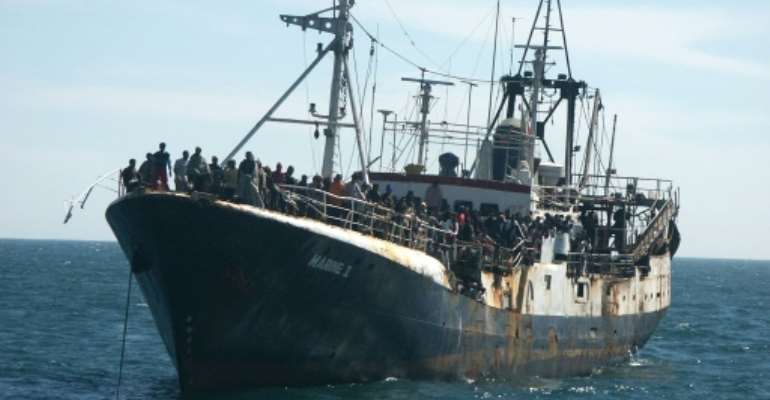 Bereaved Gambians shouted in grief and sobbed Thursday as they recounted how their loved ones drowned attempting to reach Europe in the worst migrant tragedy off West Africa this year.

At least 62 people migrants died Wednesday when their makeshift vessel capsized off the coast of Mauritania while dozens more survivors managed to swim to shore.

The boat was attempting to reach Spain's Canary Islands -- a perilous and poorly monitored route along West Africa's coast -- when their boat hit a rock.

Most of the migrants came from Gambia, according to the Mauritanian government and the UN's International Organization for Migration.

Gambia's government said Thursday that the migrants had embarked at Barra, a town in the north of the country.

A normally bustling port town, Barra was quiet and sombre on Thursday as people abandoned their businesses to console the grieving.

Abraham Gomez, a tiler, said that his sister Tida, a 29-year old divorcee with three daughters, stole money from their mother in order to pay for the passage.

Tida Gomez told her family she was travelling for a naming ceremony.

"I got the information about her journey three days after she left here," he said, with his mother and five sisters wailing and rolling on the ground beside him.

"She was not happy with my mother's economic situation and so she decided to risk her life," he said.

Tida Gomez and one of her daughters who travelled with her both drowned, Abraham said.

Her story echoes that of former restaurant worker Amie Dubio, 21, who told her family she was going to work in Senegal.

She also died at sea, her grandmother Fatou Charreh said through tears.

Jatta Mbye, who was 17, boarded the migrant boat with two family members after hearing that smugglers were in the area scouting for passengers.

"When my grandson and these people (...) heard of the news, they decided to join the trip," said his grandmother Fatou Mboge, who was sad but calm.

"We were hopeful that they were going to succeed."

The sinking in Mauritania is the largest known loss of life along the so-called western migration route this year, and the sixth deadliest migrant capsize globally, according to IOM data.

Mauritanian authorities said the boat had been carrying between 150 and 180 people when it sank.

Migrant passages along the route from West African countries to the Canary Islands have increased recently as authorities clamp down on crossings to Europe from Libya.

Some 158 people are known to have died trying to reach the Canary Islands so far this year, according to the IOM, against 43 last year.

Don't succumb to pressure to support LGBTQI agenda – GMM to ...
8 minutes ago