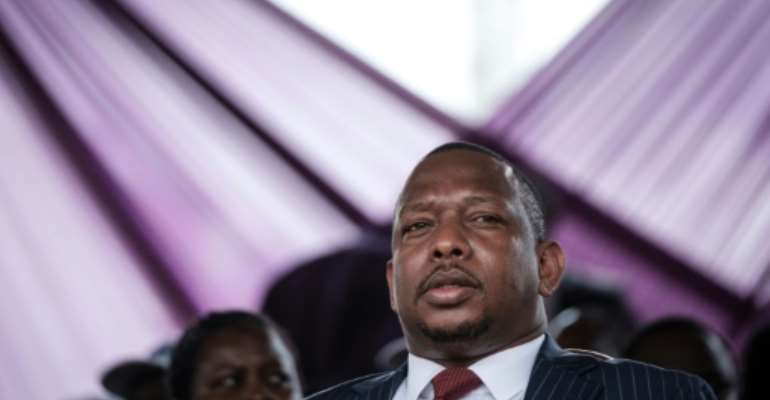 'Sonko' is Swahili slang for rich and flamboyant. By Yasuyoshi CHIBA (AFP)

The flashy governor of Nairobi was arrested Friday after Kenya's chief prosecutor ordered his detention for alleged economic crimes.

Governor Mike Sonko is the latest in a string of top officials -- including Finance Minister Henry Rotch -- to be hauled in on corruption charges as Kenya battles to clamp down on rampant graft.

"The Governor of Nairobi Mike Sonko has been arrested by our officers in Voi," in the south of the country, Yassin Amaro, spokesman for the Ethics and Anti-Corruption Commission (EACC) told AFP.

Footage on local media showed the governor scuffling with police before being handcuffed and put in a chopper to Nairobi, where he arrived in the late afternoon.

Sonko and other county officials are accused by public prosecutor Noordin Haji of having benefitted from irregular procurement and payments of $3.5 million.

Haji said he had sufficient evidence to prosecute Sonko and his fellow suspects for "unlawful acquisition of public property, money laundering and other economic crimes".

"I have therefore ordered for the immediate arrest and arraignment in court of the Governor of Nairobi Hon. Mike Mbuvi Sonko and other persons," Haji said in a statement earlier Friday.

Haji said his investigation into Sonko and his officials had been challenging "because of the repeated attempts by the accused to obstruct the course of the investigations by deploying intimidation tactics in addition to using goons to threaten law enforcement officials carrying out their constitutional mandates."

Since his election, Sonko has chosen to operate from his rural home in Machakos, 60 kilometres (37 miles) southeast of Nairobi.

He is also known for his style mimicking an American rapper, dripping with expensive gold and diamond jewelry, wearing bright colours, and on occasion, golden shoes. He recently drew criticism for displaying his opulent dining room on social media.

In a statement issued on county government letterhead, Sonko dismissed the charges against him as "choreographed lies" and urged his supporters to remain calm.

"Be calm. Don't worry. Don't panic. For justice will prevail," he said, adding that there was no need for his arrest and he would happily have turned himself in.