Algeria braces for more marches ahead of opposed presidential vote 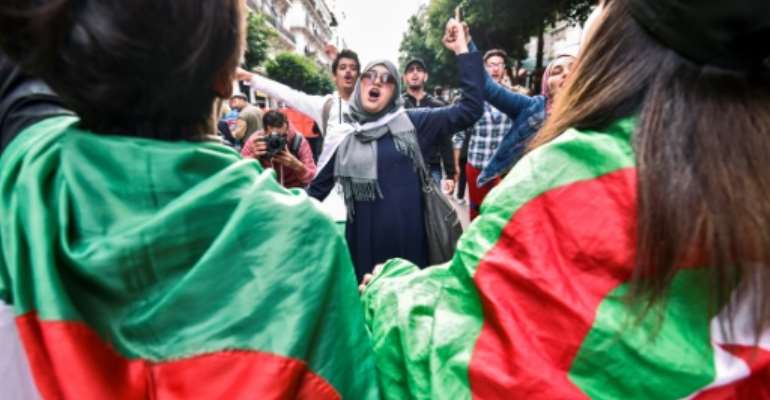 Friday will mark the 42nd consecutive Friday the Algerian "Hirak" protest movement has organised anti-government marches across the country, and will be the last ahead of unpopular presidential elections on December 12. By RYAD KRAMDI (AFP/File)

Algeria braced for fresh demonstrations Friday, the last in a series of weekly marches before a presidential election opposed by a protest movement that fears it will cement in power politicians close to the old guard.

For nine months, protesters have marched on Fridays to demand that next Thursday's election not entrench a political elite linked to longtime strongman Abdelaziz Bouteflika, who quit in April when confronted by a wave of people power.

"I am not against voting, I am against this election because it is only serving to recycle Bouteflika figures," said Fatiha Bendahmane.

The five candidates seeking to replace Bouteflika all either supported the former leader or participated in his government, and all have been the target of the protesters' hostility.

"We will have a new name but the same policies that destroyed the economy of this country. I will march today to say no to voting with this regime," said Bendamane, a 55-year-old teacher, as she prepared to march in the capital Algiers.

Friday will mark the 42nd consecutive Friday the "Hirak" protest movement has organised marches across the country.

Checkpoints outside Algiers were only letting in vehicles registered in the capital on Friday morning, an AFP correspondent reported.

Busloads of plainclothed and anti-riot police were deployed to the city centre equipped with water cannons.

According to Amnesty International, Algerian authorities have "escalated their pre-election crackdown on protests" in recent weeks by "carrying out waves of arbitrary arrests".

Marches are expected to start after midday prayers.