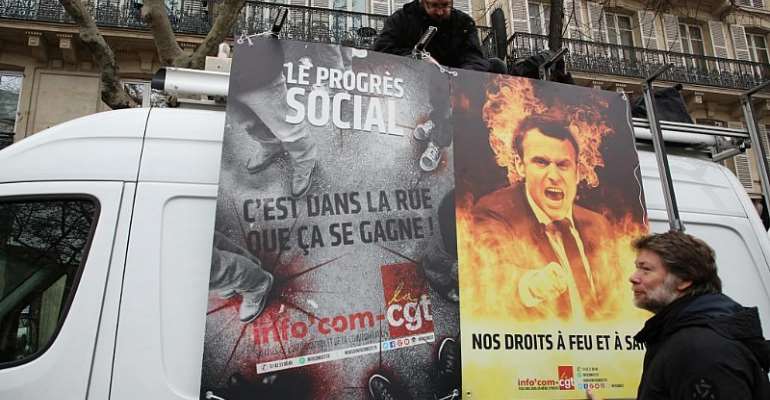 France is preparing for a second day of public transport mayhem and school closures after trade unions warned they would keep up strike action to protest President Emmanuel Macron's proposed pension reforms.

The first day of strike action, seen as a major test for President Emmanuel Macron's ambitious vision of reforming France, saw giant rallies across the country coupled with walkouts that paralysed transport and closed schools.

Friday is set to follow a similar pattern, with almost all high-speed train services cancelled, most of the Paris metro system shut down and hundreds of flights set to be axed.

Rail workers voted to extend their strike through Friday, while labour unions at the Paris bus and metro operator RATP said their walkout would continue until Monday.

Yves Veyrier, head of the hardline FO union, warned the strike could last at least until Monday if the government did not take the right action.

"The strike is not going to stop tonight," added Philippe Martinez, secretary general of the CGT union, late on Thursday.

On Friday the Minister for Solidarity Agnès Buzyn announced she and the high-commissioner for pensions Jean-Paul Delevoye would receive all union leaders on Monday. She told Europe 1 the "anger of the French people" had been "heard" through Thursday's demonstrations.

Prospect of fuel shortages
As on Thursday, national train operator SNCF has axed 90 percent of the high-speed TGVs on Friday and just 30 percent of regional trains will run.

On the Paris metro, 10 lines will remain totally shut, four will work at a much reduced capacity and only two - the driverless 1 and 14 - will work normally.

Flag carrier Air France is again axing 30 percent of domestic flights. There will also be severe disruptions on the Eurostar, with some two dozen trains cancelled on the cross-Channel route.

A weekend of travel chaos is also expected.
National newspapers have been unable to publish their print editions, and the far-left CGT union said workers had blocked seven of the country's eight oil refineries, raising the prospect of fuel shortages if the strike continues.

High turnout
At least 800,000 people protested across France on Thursday.

Union leaders were buoyed by the numbers of healthcare staff, railway workers and teachers who heeded the strike call, and by the numbers who showed up at an anti-government march in Paris and other French cities.

Police used tear gas in central Paris on Thursday afternoon when protesters on the fringes of the trade unions' march threw fireworks at officers, ransacked bus stops, and set fire to rubbish bins.

Dozens of people were arrested.
Union leaders said those involved in the violence were not affiliated with the trade union movement.

can retire up to a decade earlier than the average worker.

Macron says the system is unfair and too costly. He wants a single, points-based system under which for each euro contributed, every pensioner has equal rights.

The government has given no indication it will make any climb-down over the central elements of the reform.

But in view of the anger expressed on the streets, Macron's officials have left themselves scope to make some concessions over the way that the changes will be phased in.

'Calm and determined'
So far, Macron, a former investment banker, has largely succeeded in pushing through a series of controversial reforms, including freeing up labour laws and tightening access to unemployment benefits.

But this is the first time the various groups have come together in protest, in a sign of unity not seen since 1995 when France was paralysed for three weeks from November to December in an action that forced the then government into concessions.

Macron has sought to rise above the strikes and has chosen to make no official comment in the days leading up to the stoppages.

A presidential official, who asked not to be named, said he was "calm" and "determined to carry out this reform" in a mood of "listening and consultation".