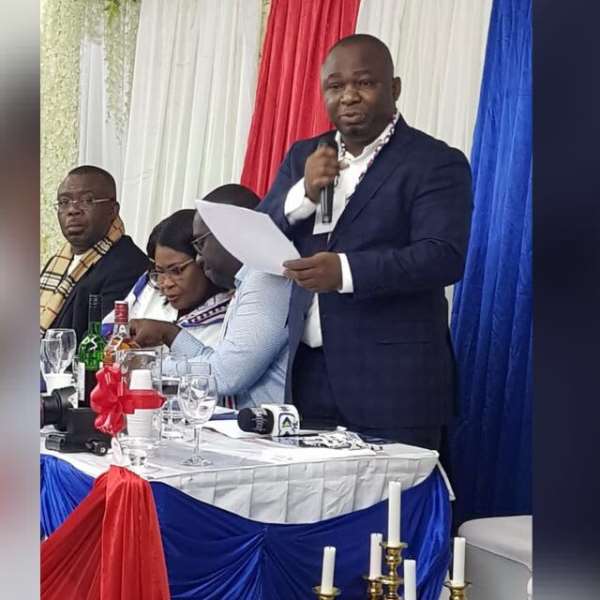 The New Patriotic Party, Denmark Branch (NPP-Denmark) has launched its women’s wing in a beautiful ceremony that also included a fund raising dinner in Copenhagen. The event, which took place on the 23rd of November 2019, was well organized and very well attended under the theme “Mobilizing Ghanaians in the diaspora for national development”. The guest of honour was H.E. Mrs Amerley Ollennu Awua-Asamoa, Ghana’s Ambassador to Denmark. In addition, the party’s national organizer, Mr. Sammi Awuku; Honourable Stephen Asamoah Boateng, Director General of SIGA (State Interests and Governance Agency); and Lawyer Justin Kodua Frimpong, CEO of Youth Employment Agency, also graced the occasion as special guests.

In his welcoming address, Mr. Kennedy Adjei (the host chairman) thanked the audience for showing up in their massive numbers for the event. He particularly thanked the Ambassador for graciously accepting to be the guest of honour for the occasion as well as the special guests from Ghana led by the national organizer for coming all the way to grace the occasion. Chairman Adjei then took the audience through the history of NPP-Denmark, from its formation and inauguration in 2011 to its present state. He said the launching of the women’s wing was an important step towards the branch’s goal of becoming a strong, vibrant and influential in the party’s larger scheme of things. Acoording to Chairman Adjei, “NPP-Denmark is now a well-established branch party with a growing membership. I therefore urge everyone here who lives in Denmark and is not yet a member to register tonight and join us. Together we can deploy our various talents and resources to help improve Ghana. Thankfully the President, H.E. Nana Addo Dankwa Akufo-Addo, recognizes the talents, skills and resources that we Ghanaians living abroad possess and is very determined to fully engage us to meaningfully contribute to his grand vision of Ghana Beyond Aid”. Chairman Adjei ended his speech by urging the Ghanaian diasporans in general to join hands to massively and positively impact on the motherland.

The guest of honour, H.E. Amb. Amerley Awua-Asamoa, in her address highlighted the many initiatives that the government has taken to ensure full participation of Ghanaians in the diaspora in the economic direction of the country. Honourable Asamoah Boateng (Asabee) and Lawyer Justin Kodua Frimpong took turns to excite the audience with their brilliant speeches, which mainly centered on the positive things government is doing to better the lives of Ghanaians particularly those under their respective agencies. Finally, when Mr. Sammi Awuku took the stage the excitement went a notch higher. True to form, the national organizer did not disappoint. He worked the crowd into frenzy with his eloquence and oratory. He connected well with the audience. After his brilliant speech, Mr. Awuku stood in for the national women’s organizer, madam Kate Gyamfua, to duly inaugurate NPP-Denmark’s women’s wing. He then charged members of the women’s wing to close their ranks and work together in unity for the good of the branch and the mother party. NPP-Denmark’s acting women’s organizer, Ms. Ivy Asare, on her accepted the challenge from the national organizer and promised to work hard to ensure the women’s wing work in unity to strengthen the branch.

Following the fund raising, the first vice chairman of NPP-Denmark, Mr. Ahmed Antwi Boampong said the vote of thanks after which the audience danced the rest of the night away.