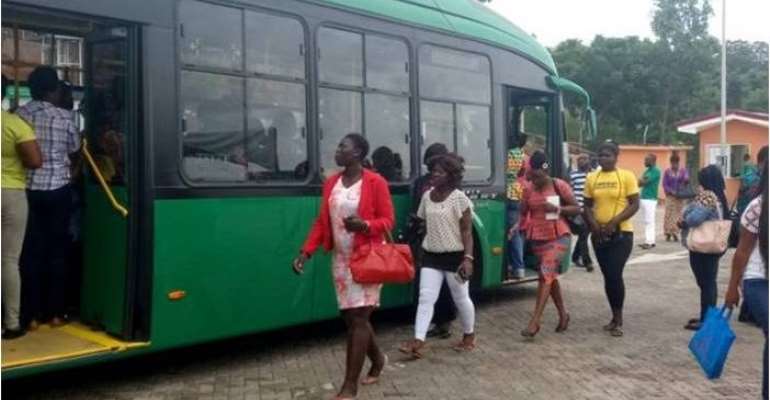 The Chief Executive Officer of the Accra Metropolitan Assembly (AMA), Mohammed Adjei Sowah, says his outfit is working with stakeholders to ensure that specific lanes are dedicated to Aayalolo buses in a bid to reduce traffic congestion.

The specialized bus-based mass transit system which was supposed to use dedicated lanes for fast movement within urban settlements have over the years, failed to meet international standards of having these specially designed lanes.

But speaking on the Citi Breakfast Show on Thursday, Mr Adjei Sowah said engagements have already begun to be able to take that policy decision to create particular lanes for the buses.

“In transport management, you also need to entice people. You can't just force people to leave the comfort of their private vehicles and hop into a trotro or aayalolo bus, there should be an alternative. So we are working with the Roads and Highways, Local Government, Interior, and Transport Ministries.”

“We have started conversations on that. It is chaired by the Senior Minister who is coordinating all the Ministries to be able to make sure that the dedicated lanes are given to the aayalolo buses. It's a policy decision and it's an object of discussion for government to take that decision,” he noted.

The Greater Accra Passenger and Transport Executive (GAPTE), managers of the Aayalolo buses had earlier disclosed plans to implement a contraflow system for the easy flow of the buses on some selected roads.

A contraflow system provides for traffic lane that flows against normal traffic.

“We are talking about a system which would enable the buses to move contrary to the original flow of traffic to allow the buses to arrive at their destinations faster,” said a board member at GAPTE Rudolph Beckley.

The contraflow system which was to be deployed before the end of September 2019 has, however, seen no implementation till date.

The system, which kicked off in 2016 was expected to begin in Accra and subsequently take off in other regions.

But the system was subsequently renamed the Quality Bus System (QBS) after failing to meet international standards of having specially designed lanes and being fraught with other challenges.

Patronage of the buses was quite high when the service began in 2016, but it started dwindling six months afterwards from the expected 12,000 passengers per day to 9,000.

Patronage on a daily basis currently ranges between 9,000 and 10,000 on the Amasaman-Ofankor-Achimota-Accra Central Business District (CBD) corridor.

Aside the low patronage, drivers of the aayalolo buses have embarked on a series of strike actions over unpaid salaries.

GAPTE eventually had to apply for a bailout from the government to aid in its financial challenges to which they were turned down.